A short walk up the footpath that leads from the layby on the A612 opposite the old school in Thurgarton takes you to the Scheduled Ancient Monument of Castle Hill. The hill is only 30 m high but commands a panoramic view over the village and the Trent Valley. What is the evidence for a castle on this site? 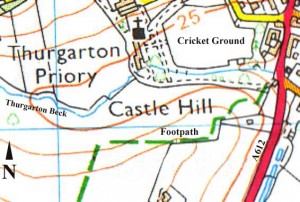 At first sight there is little to suggest that a castle might once have stood on the hill. On the right of the footpath are some irregular earthworks and on the left the ground has been flattened by repeated ploughing. The most obvious feature is a rectangular banked enclosure that surrounds a small mound. This was more prominent when it was described in the Victoria County History for Nottinghamshire published in 1898 as ‘ a small, almost square, entrenchment 200ft. by 160ft. Within the enclosure is a small mound’[i]. The Ordinance Survey cartographers in their 1885 and 1921 maps labelled it as the ‘supposed site of a castle’,  Their scepticism was well founded for many ‘Castle Hills’ that litter the landscape were never occupied by a castle and many acquired their name in recent centuries from local folklore or antiquarians.  Besides a castle these earthworks in Thurgarton have also been described as the remnants of an ancient British camp, a Roman fort or a Civil War fortification [ii]. 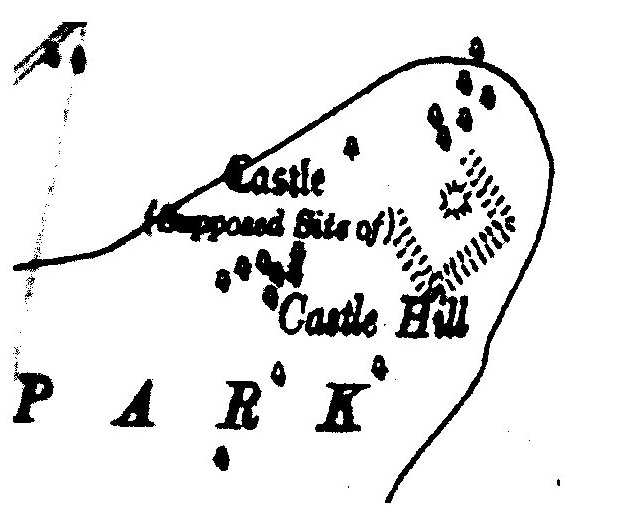 In the 1950s archaeologists excavated  the rectangular enclosure on Castle Hill and discovered two small timber built churches the first of which had been demolished to make way for the second one. 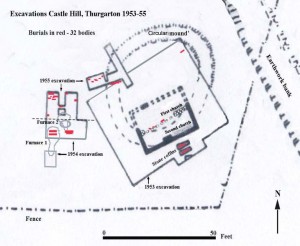 The remains of the first church was a partially robbed out stone wall (the footing for timbers walls) and a layer of plaster Surrounding the church was a burial ground containing over 30 bodies of men, women and children whose ages ranged from newborn to about 40 years. The more intact bodies indicated typical features of Christian burial but most skeletons were incomplete having undergone considerable disturbance. The trauma to the bodies was caused by a flattening of the site with a ‘scalping’ of the hill and the laying of 2-3 ft of clay soil mixed with charcoal and considerable quantities of small weathered shards of Saxon-Norman pottery. The evidence points to a rapid levelling of this first church and its surrounding graves to form a flat platform base for the subsequent building of a second church.

Measuring 25ft by 18 ft the new church was also of timber sitting on stone footings. A layer of fallen plaster survived which included pieces with painted decoration and wattle imprint. A door slab was found almost half way along the south wall outside which, within a few feet of the east end of the church, were two large coffins of Ancaster stone. The coffin closest to the church had a plain lid and contained the skeleton of an elderly male. The second coffin, which contained the remains of an elderly female, had lost its lid which lay a few feet away. This lid bore the partly worn carving of a cross with a ‘Calvary Mount base’ similar in style to 11th and 12th century examples from Lincolnshire [iii]. 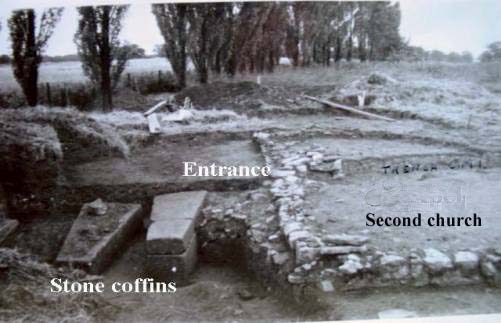 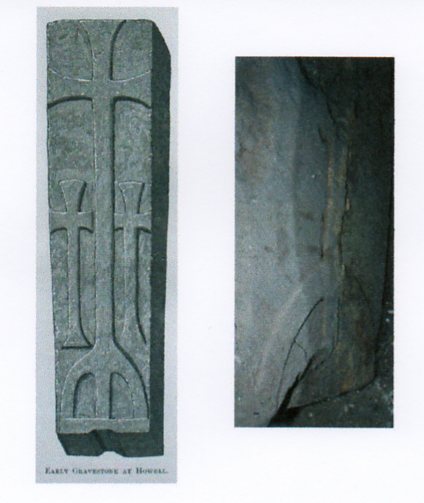 Based on these stone coffins the second church was dated to the early 12th century. No date was suggested for the foundation of the earlier church but the abundance of late Saxon ware suggested a preNorman foundation and raised the possibility that this might be the church mentioned in the Domesday entry for Thurgarton.

The conclusion was therefore that this was a religious site rather than a castle and Cathcart King in his Castellarium Anglicanum, (the bible of English castle studies) rejected Thurgarton from his list of castle earthworks [iv].

The early maps of Thurgarton, dating from 1730, include Castle Hill in the same location as modern maps. Documents from 1538 also identify Castle Hill and Field in this part of Thurgarton. The name ‘Castle Hill’ has a long pedigree in the parish and is  not a modern invention.

The rectangular enclosure is only a small part of a much wider network of earthworks and tracks on Castle Hill. Only a small fraction of the site was explored in the 1953-5 digs. This is evident from examination of aerial photographs of the site taken during the 1955 excavations. The extent of the archaeological dig is outlined in red and lies within the rectangular enclosure outlined in blue. 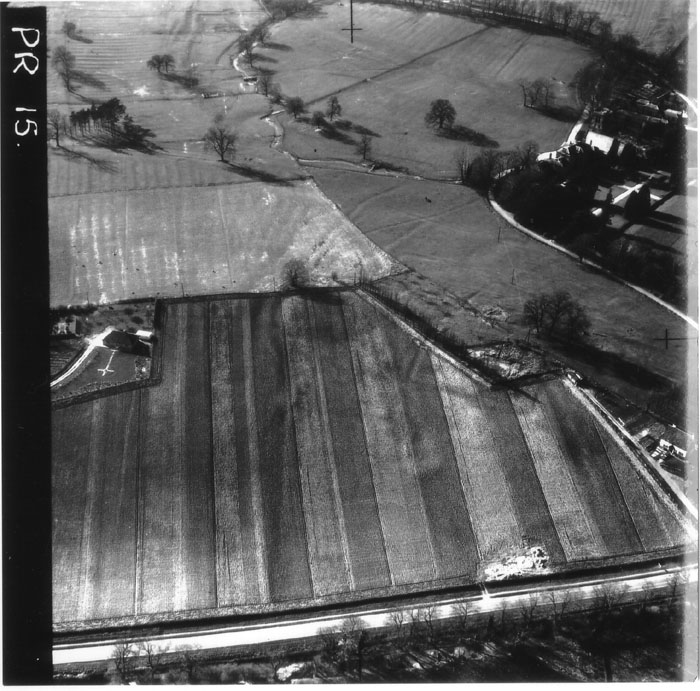 1955 excavations outlined in red within rectangular enclosure in blue 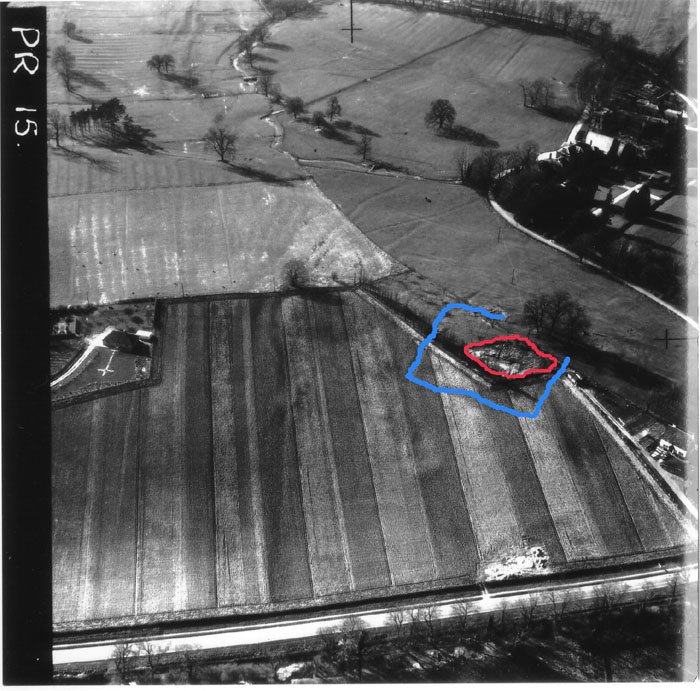 A close study of a series of aerial photographs reveal a complex of earthworks, mounds, track ways and ridge and furrow field patterns on and around Castle Hill – some more obvious ones are shown below. 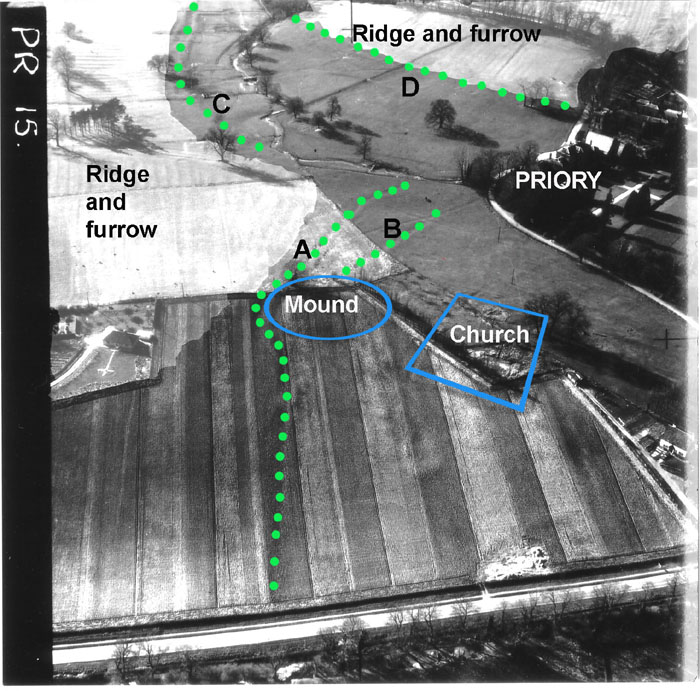 Close to the centre of the photograph is an oval mound partially surrounded by a ditch. It is barely discernable today on the crest of the hill to the left of the footpath. From photographs, plans and field walking it measures about 40 to 50 metres across and lies 20 metres to the west of the rectangular enclosure. There are several explanations for circular mounds in the landscape: windmills, ancient barrows and prospect mounds must all be considered but none fit with this mound. It most closely resembles a castle mound or motte [v].

The position of the mound corresponds accurately with the location of Castle Hill on the early maps. In size and shape it lies well within the range of castle mounds but at the smaller end and its lack of height (about 1 metre) is explicable by repeated ploughing [vi]. Its position on a hill top with wide views over the river valley may support the more romantic or military notions of a castle site but more convincing is its closeness to a church and burial ground directly overlooking the village.

The abundant ‘Saxon-Norman’ pottery found on this site included St. Neot’s, Shelley, Splashed and Stamford wares and suggests the presence of domestic building(s) on or close to Castle Hill.

Following the 1950s excavations the site became a scheduled ancient monument which covered the whole summit of Castle Hill including the mound feature. Only very limited excavations of the mound and ditch were allowed and revealed an odd reversal of normal stratigraphy with Roman pottery overlaying Saxon-Norman pottery. This could be due to the earth from the surrounding ditch being thrown up to build up the central mound so reversing the usual layers.

Several postholes were also discovered on the mound, one with skerry stone footings for a large upright timber. There was no evidence of a stone building and any castle that may have existed here would have been built of timber (most early Norman castles were built of timber[ix]).

The archaeological evidence for this site is incomplete and a proper re-evaluation would benefit from modern survey techniques and more extensive excavation. The evidence points to an elite domestic dwelling alongside a preNorman church and burial ground which was  replaced in the  early Norman period with a new church and a small timber castle. How then could this fit into an historical context?

The Danish incursions of the 9 -10th centuries created a new class and culture of Anglo -Scandinavian landowners in the mid Trent Valley. The place name of Thurgarton implies that Thorrgeir, a Dane, became one such new landowner. He or his tun was sufficiently important in the 10th century for the name to be applied to the surrounding wapentake (now called Thurgarton Hundred).

The local lords or thegns of Thurgarton may have established a centre of power on this hill – the thegn’s estate centre consisting of a hall and an estate church and graveyard controlling a landscape of scattered farms and families.

In 1066, Thurgarton’s  thegn, Swein, controlled several estates in Derbyshire and Nottinghamshire which following the Norman invasion fell into the hands of Walter Dayncourt. The beginnings of the village of Thurgarton probably belongs to this early Norman era when most parishes in the area were reorganised into an open field system surrounding a single central settlement. The old thegn’s hall and church were flattened  and replaced by a timber castle and church. Such deliberate slighting of Anglo-Saxon sites was not uncommon and was a forceful demonstration of the power of the new regime [x].

In the 1980s extensive investigations at Goltho, Lincolnshire, revealed the many phases of a local lord’s hall from c. 850 to 1150 AD and demonstrated the immediate adoption and adaptation of the elite site by the new Norman landholder [xi]. Similar findings at Sulgrave and Raunds led to a plethora of other examples and the realisation that this was a common practice after 1066 and that many more examples remain to be discovered.[xii];. The detailed changes of each site varied but essentially the Norman lords built new halls or castles and new churches in the old centres of power of the Anglo-Saxon thegns.

The fate of Castle Hill

If indeed there was a castle at Thurgarton it seems to have shared the fate of most minor castles which were ‘redundant as early as the mid-13th century and slowly became local landmarks and objects of folk memory’[xiii]. In the case of Thurgarton the founding of an Augustinian Priory in the 1130s shifted the location of power a few hundred metres to the north and Castle Hill changed to an industrial site in the outer precincts of the priory.

Castle Hill today from the north.

2 thoughts on “Was there a castle in Thurgarton?”