Thurgarton first appears in the written records in Domesday as Turgarstune (1). The village name in the official documents of the following centuries has several forms:- Turgareston, Turgardton, Thurkarton, Thorgeirton, Torgerton, Thurgarthton and Thorgarton. Such variation in spelling was common in mediaeval records and it was not until the 17-18th century that the modern spelling of Thurgarton became the standard form. What is the origin of the name?

The Nottinghamshire historian Rastall chose the Thorgarthton version and maintained that the name derived from the Norse god Thor, garth a garden and ton a homestead or estate (2). This conjures up the unlikely image of the mighty hammer wielding god enjoying his Trentside garden. 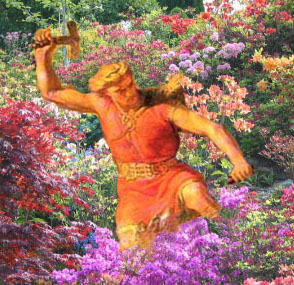 Another famous Nottingham historian W E Doubleday ascribed the name to Turgar, an Anglo-Saxon novice monk who according to The Crowland Chronicle survived the Danish raid on Crowland Abbey  in 870AD (3).

When the mass was finished, just as the abbot and his assistants had partaken of the holy communion, the Danes burst into the church. The abbot was slain upon the holy altar by the hand of the Danish king Oskytal, and the other priests and monks were beheaded by the executioner.The old men and children in the choir were seized and tortured to disclose where the treasures of the abbey were concealed, and were also put to death with the prior and sub-prior.

Turgar, an acolyte of ten years of age; a remarkably beautiful boy, stood by the side of the sub-prior as he was murdered and fearlessly confronted the Danes, and bade them put him to death with the holy father. The young Earl Sidroc, however, struck with the bearing of the child, and being moved with compassion, stripped him of his robe and cowl, and threw over him a long Danish tunic without sleeves, and ordering him to keep close by him, made his way out of the monastery, the boy being the only one who was saved from the general massacre. 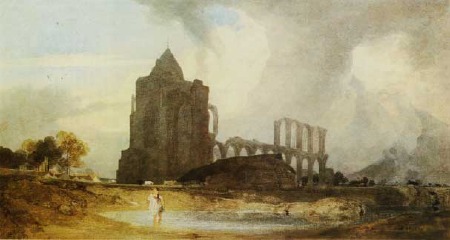 The boy apparently escaped from the Danes and returned to serve as a monk in the restored abbey where he died at the great age of 115. Doubleday has him founding a religious cell in Nottinghamshire around which grew the community of Turgar’s tun

Norse god or a brave novice monk, both are rejected by modern academics who firmly trace the village’s name to the Scandinavian personal name Thorgeirr and the AngloSaxon ton meaning settlement or homestead.. This combination of Scandinavian and AngloSaxon elements, labelled a ‘Grimston Hybrid’ by place name experts, is common in parts of the East Midlands especially in the Trent Valley and implies the Danish takeover of an existing Anglian estate (4).

The Viking incursions into 9-10th century England led to a major change in the political and cultural life of the land.  Historians still debate whether this was a small warrior class of Danes wresting lordship of Anglian lands or a major Scandinavian migration and settlement. Whichever is true the result was a major division of England into the north-eastern counties (the Danelaw) and the surviving Saxon kingdoms of the south and west. A new Anglo-Scandinavian society emerged in the Danelaw which became part of a thriving North Sea culture.

Saxon control of the eastern half of the old kingdom of Mercia was lost when Alfred and Guthrum agreed in c886 on a settled frontier based on Watling Street. Fortified towns or burghs were established on both sides of the border; in the East Midlands the Danes established the territory of the Five Boroughs – Nottingham, Derby, Lincoln, Stamford and Leicester.

It was some time in the 10th century, probably during a period of Saxon dominance, that the four county structure of the region was established based on Derby, Leicester, Lincoln and Nottingham (Stamford lost out). Counties were divided into smaller administrative units. Called hundreds in southern counties, they were given the Scandinavian title of wapentakes in the northern Danelaw counties. Amongst the eight wapentakes of Nottinghamshire was that of Thurgarton (later combined with Lythe) which stretched from Ossington in the north to Sneinton on the outskirts of Nottingham town to the south and contained over 60 parishes (many of the modern parish boundaries were also established in this period) 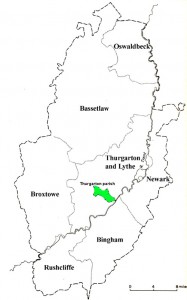 So Thugar’s tun gave its name to both  parish and  wapentake – obviously a place of some importance in 10th century Nottinghamshire.

Only one other village shares this name -  Thurgarton in Norfolk which lies 5 miles south of Sheringham. This part of East Anglia was firmly brought under Danish control in the same period as the East Midlands. We will never know if this was the same Thorrgeir.

A Thurgarton Wood Farm (now Thurgarton Wood House) is found in the parish of Potter Hanworth in the Kesteven district of Lincolnshire. Walter first Baron Dayncourt was granted land by William 1 in Lincolnshire, Nottinghamshire and Derbyshire. His main holdings were concentrated a few miles south of Lincoln City, around his caput (headquarters) at Blankney. Amongst his other lands was the vill of Thurgarton, Nottinghamshire where in the 1130s his son Ralph founded an Augustinian Priory. The Thurgarton Cartulary records that in the 13th century, Philip of Martin (Ralph’s great grandson) made several grants of land in Potter Hanworth to the priory including ‘all his wood called Northhagge’ (5). 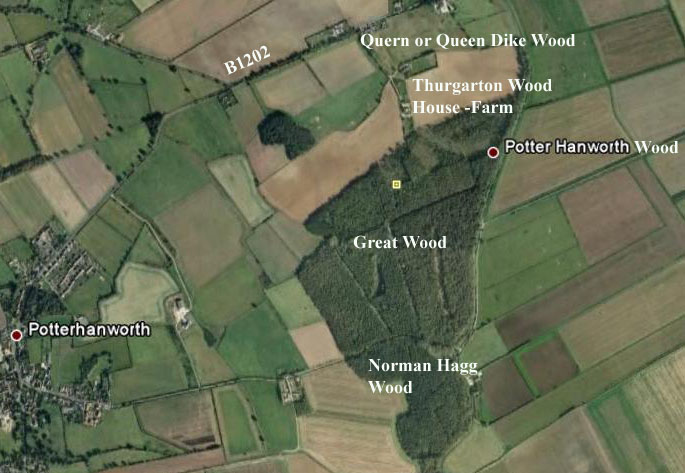 One thought on “The origin of the place name Thurgarton”