The document shown in Figure 1 is kept in the Archives of Trinity College Cambridge. It dates from 1576 and lists all the tenants in Thurgarton who rented land from the College (1). 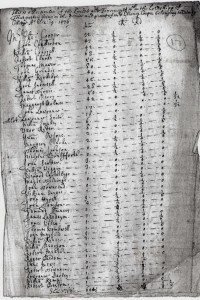 Over 640 acres were held by 41 tenants; the largest farmed 80 acres but most only 1 to 3 acres. 5 of the tenants were women including Elinor Cooper, the widow of the late Lord of the Manor, Thomas Cooper; she continued as leaseholder of the college lands in Thurgarton after her husband’s death.

Attached to the  document is a second page shown in figure 2 on which is a list of names of 15 tenants alongside their individual marks; each has a separate and distinctive mark. 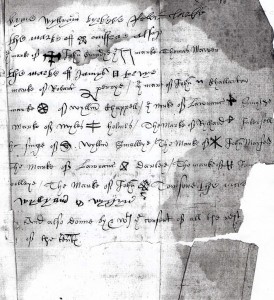 All 15 who made their mark are found in the full list of tenants in the first document and include both large and small landholders but no women; the remaining 26 tenants appear to have consented to a communal mark ” and also done by me with the consent of all the rest”

A transcription of the names with their corresponding marks is shown below. 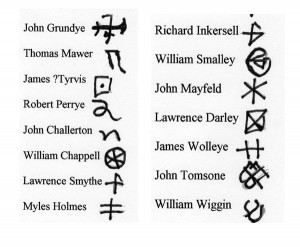 There are no duplicate marks and each is distinctive. Two or three may reflect the initial letter of the tenant’s name eg Wiggin and Smalley but the others do not and vary from simple lines and circles to much more elaborate flourishes.

The use of marks to prove one’s identity or proclaim ownership dates from early human history – from marking one’s territory with symbols to branding livestock or slaves. In the mediaeval period even the educated and literate who were able to write their names still employed symbols as proof of their identity – carved rings or matrices which they imprinted  in wax.

The marks we see in these documents from16th century Thurgarton are very different from the usual ‘X’  mark seen in wills and other signed mediaeval documents. Similar symbols are seen in 13th century estate books from Northamptonshire but were used to denote the size of each tenant’s holdings(2). These symbols from Thurgarton  are more reminiscent of those employed by stonemasons, merchants or carpenters and it may be that they were similarly employed to confirm ownership of livestock, agricultural or trade implements, furniture and any moveable item essential to one’s living. They appear to be parish brand marks and were used by all ranks of the parish society from William Wiggin  who held a mere 2-3 acres to John Mayfield who rented 9 acres and Thomas Mawer and John Grundy who rented 40 to 80 acres.

Consultation with both county and national archives have failed to produce similar parish wide use of such symbols; it is possible that such parish marks were in common use but documents such as this one rarely survived. Anyone who knows of similar examples – please contact me.

Note on the Grundy family

John Grundy was mentioned in Thomas Cooper’s will “I give my servant John Grundy the tenement he occupies for his natural life and to his son Michael Grundy and heirs and I give Margery Grundy my Nurse five marks (money) for remembrance as a servant ” In 1614 his son Michael Grundy was refused the style of gentleman by Norroy King of Arms but by 1628 the family was described as :- ‘The Grundies of Bleasby with a coat of arms argent on a cross engrailed between four lions passant gardant gules five marlets or and a crest of four demi-lion rampant gardant sable besanty’