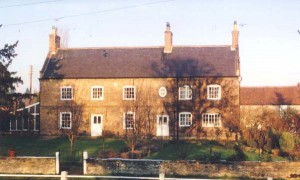 The farmhouse at Manor Farm, supposedly built in the reign of George III , had a red and blue chequered tile  floor which was scrubbed every day with soft soap. A large table which was also scrubbed almost white seated all ten of the family. There was a large dresser with cupboard and six draws and three wall shelves above. The ceiling had black beams with large hooks for hanging hams and sides of bacon; the walls were painted a grass green. Two large double-barrelled shotguns hung up on the largest beam. A big open black fire grate with boiler and oven heated the water and was used for cooking. A fire guard was kept in front of the fire and on the floor was a large hand made rug made by pegging strips of old materials of various colour into Hessian. There were three pantries one of which was called the dairy. All had brick and stone slabs to keep the foodstuffs and drinks cool. A large meat safe in the bottom pantry kept flies off the food.

The hall led through to the front room and the boot room. The boot room had  no windows and with the door closed was pitch black- that is where we were put if we didn’t eat our meals; Phil spent many a Sunday afternoon in there. It was also where all the boots and shoes were kept as well as a rag bag, a string bag, a bag of flour for cooking, walking sticks, brooms, polishes, brushes and cartridges. The hall had a long row of coat hooks and several bells to summon the family for meals.

The front room was very homely with a carpet and woollen rug in front of a new tiled fireplace which replaced the old black open fire. A brown  sofa and chairs were replaced by a new three piece suite; a large round table with aspidistra in a brass vase was replaced by a square table. A sideboard with cupboards, drawers and shelves held the family silver and heirlooms. A piano completed the furniture. Behind the door was a barometer and a grandfather clock stood by the sideboard. Halfway up the clock was a tidemark where the Trent flood water reached when the family lived at Wilford. A small room in the corner was once a bottle store for wine. The end room was a parlour which had a lovely  fireplace. It wasn’t used very often, just on special occasions.

There were four staircases. Two bare wooden stairs led to the attic which comprised four rooms. One was used as a bedroom but the others were storerooms for apples, pears and odds and ends. There were three large bedrooms and a bathroom was fitted just before the war. The bedrooms had cupbords, dressing tables and iron and brass bedsteads. All windows were sash types and doors all had latches. The kitchen door had a two inch wide iron bar which fitted across the door for security as well as locks and bolts.

Outside in the yard was a water trough with hand pump, the pig swill bins, a coal shed and the washhouse where at one time we all used to wash. The water in the washhouse was pumped by hand from a well into a stone basin – this was used for all your ablutions. It was also where the Monday washday occurred with two coppers for boiling clothes and providing hot water. The wash house also contained the water tank and the milk cooler; it was also used to hang and cut up the unfortunate pig.

The outside toilet was the dry bucket type – two buckets and seats side by side so one could have a chat ( we called it the tandem). Going to the loo on a dark night meant a walk up the yard with a hurricane lamp or a candle which always blew out in the wind. The large shadows cast around us left much to the imagination. Chamber pots were kept under the bed and had to be emptied and cleaned in the morning.

At the bottom of the yard were a log shed and the hen house. On the night that Hilda got married a fox got in amongst the hens and killed nearly fifty Rhode Island pullets. At the rear of the house was a shed where we once kept ducks but it was then used to store the lawn mower, roller and wheelbarrows.. There was also a Motor shed which housed our model-T Ford which was used on Sunday evenings to take the family as far a field as Hazelford Ferry or Hoveringham. 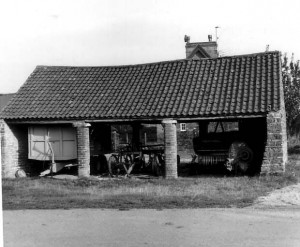 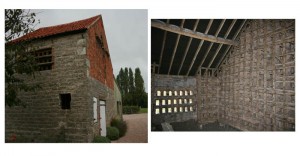 In the house the day began at 6 o’clock when the fire grate was cleaned out, the grate black leaded, the boiler filled with water and the fire of logs and coal lit – it heated the room , provided hot water and heated the oven for cooking, for boiling the kettle, for roasting, frying and heating the flat irons. Electricity and mains water came to the village in the mid 1930s and the old grate was replaced by a modern Triplex tiled grate which didn’t need black leading or repeated filling with water.

The household chores were always done on the same day of the week and in strict rotation. Monday was always washday whatever the weather and lasted all day. The copper fire was lit to boil the clothes which were placed in a dolly tub and washed by hand with dolly pegs; a washboard was used to remove ‘those awkward stains’. After drying outside on the clothesline in the orchard the clothes were brought in to iron with the flat irons heated on the fire. A Ricketts Blue Bag was used to make the whites whiter and shirt collars and cuffs were starched. On Tuesdays and Wednesdays the bedrooms were cleaned from tip to toe with brushes, mops and dusters. Pinafores and bonnets were worn for this dusty task. On Thursdays and Fridays the downstairs rooms were cleaned. The cutlery was polished weekly , boots and shoes cleaned, suits and trousers brushed and pressed. On Fridays all the silver and brass was polished, the floors scrubbed, and the yard swilled.

Home made jam was made along with pickles, cakes, pies, chutney, red cabbage and herbs. Fruit such as damsons, plums, gooseberries, blackberries and pears were bottled in Kilner jars for winter but apples were laid out  onto the attic floor , cookers and eaters, and used through the winter as required. From time to time butter, cheese and wine were made for home consumption. Eggs were collected twice a day, sorted , washed and packed for the Egg Marketing Board. At Christmas all the mincemeat , puddings, cakes, bread sauce and stuffing were home made – prepacked food was unknown. Potatoes, carrots, beetroot and parsnips were stored in the garden in ‘Pies’ – they were placed in separate heaps and covered with straw then soil on top of the straw – this ensured an abundant supply through the winter. The farm crops –turnips, swedes and potatoes were all stored in the same way out in the fields.

John, Phil and Jim Bentley with next door neighbours – Sid and Ernest Crowder and Sam Holmes ( standing behind ) , photographed in 1930s outside Manor Farm 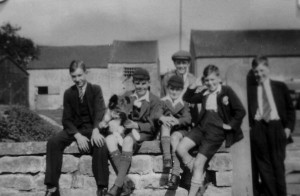 .This was Manor farm as I remember it, where we all grew up – so lucky to be born into a family that can look back on so many happy times together.