The Nottingham to Lincoln line

The railway came to Thurgarton in 1846. The 1830-40s were the years of ‘railway madness’ when numerous railway companies vied to connect the major towns of Britain. George Hudson the ‘Railway King’ had formed the Midland Railway Company in 1844 and the Nottingham to Lincoln link was part of his ambitious scheme to dominate the railway network of the midlands and the north. 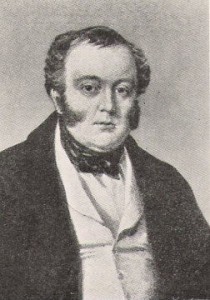 The new line was surveyed by George Stephenson and his pupil Frederick Swannick and followed the Trent Valley from Nottingham to Newark and on to Lincoln. The planned route crossed the flat valley meadows skirting the villages and passing through the western outskirts of Newark.

Figure 2 Part of the initial survey map for the parishes of Gonalston, Thurgarton, Bleasby and Rolleston (click on image to enlarge) 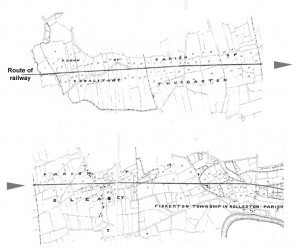 Accompanying the map was a detailed list of the fields with the names of the landowners and tenant farmers. Figure 3 lists each field in Thurgarton with the landowner ( Richard Milward or Trinity College Cambridge), the lessees and  the ‘occupier’ ( the tenant farmer who actually worked the land); presumably each received some compensation from the railway company but we do not have the details. 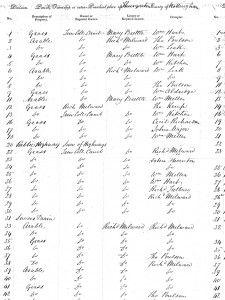 Most landowners such as Richard Milward of Thurgarton Priory, saw the new railway as a great opportunity and in addition to allowing the railway passage over his lands also invested in the company which rapidly raised the necessary capital of over £ 400,000 with a promised return of 4.5% on their investment.

Some local landowners objected to the route which on close inspection (see  figure 1) would have passed through the middle of Bleasby just north of the Waggon and Horses pub and then eastwards towards the centre of Morton village. J P Plumtree Esq. of Ashwell Hall, Morton was one such objector and insisted that the line be redirected northwards away from his estate.

First train from Nottingham to Lincoln —-

Station Street in Nottingham was festooned with flags and bunting, the band of the 4th Dragoon Guards played popular airs and a vast crowd cheered as with a shrill whistle the first train steamed out of Nottingham at 9.26a.m.on the newly built line to Lincoln. Despite heavy rain enormous crowds had gathered along the route out of Nottingham. Out in the country horses bolted, cows bellowed and sheep scampered away at the sight and sound of the engine; old men stared open mouthed and dumbfounded and young men climbed trees for a good view. The train paused at the new Castlegate Station at Newark before finally pulling into Lincoln at 10.15 am to the sounds of church bells and an enormous throng of cheering spectators. A second train followed 30 minutes later with more VIPs. Champagne and light refreshments were taken before returning to Nottingham for lunch.

— and back to Nottingham for lunch —

Both trains returned to Nottingham where the engine sheds had been laid out for a celebratory lunch.  Mr George Hudson MP and chairmen of the Midland Counties Railway drank to the health of the Queen, to other members of the royal family, to the ladies and lastly to the High Sheriff of Nottinghamshire who in turn proposed a toast to Mr Hudson before all promptly  boarded the train once again and returned to Lincoln for a public dinner.

— and back to Lincoln for dinner —

Their arrival at Lincoln was marred by the explosion of one of the cannons sounding a ceremonial gun salute – one old gunner suffered such severe leg wounds that amputation was necessary. Undaunted a huge crowd gathered for a banquet at the National School Rooms; the guest list included High Sheriffs, Archdeacons, Lord Mayors, Town Clerks, Coroners, Colonels, Reverends and Right Reverends and Esquires by the dozen.

Mr George Hudson was in fine form and proposed toasts to the Queen, the Dowager Queen, the Bishop and Clergy, the Army and Navy, the Mayor of Lincoln and finally the High Sheriff of Nottingham – Mr Hudson was thanked and toasted by one Archdeacon, two Lord Mayors, one Colonel and a High Sheriff. At this stage Mr Hudson sat down and his deputy took over and proposed and drank several more toasts but by this time who was toasting whom was not clear to the gentleman of the press charged with reporting these great events.

— and back to Nottingham to bed.

All boarded the trains for the return journey to Nottingham and the end of a heavy day.

The heavy rainstorms of the 3rd August had tragic consequences; part of the railway embankment at Gonalston Crossing had washed away and sadly, on the following day, a fireman was killed when a train derailed. 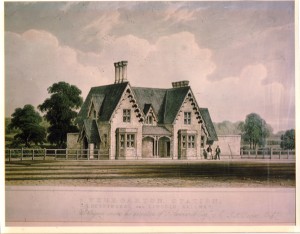 The railway station at Thurgarton lies about 400 m south of the village. The original handsome station house is essentially unchanged in external appearance;  it was designed by architects C E and T A Davies who employed the same style for most of the stations on the new line – a style described by Pevsner as neo-Tudor but by others as ‘Gingerbread’.

Initially four trains a day ran in either direction; the journey from Thurgarton to Nottingham took about 40 minutes and  to Newark  20 minutes.  Fares per mile were 3d first class, 2d second class and 11/2 d third class and livestock cost 5d per mile for horses, 2d per mile for cows and ½ d per mile for sheep. 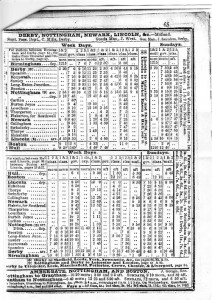 Even in a small village such as Thurgarton the railway station employed several men from station master to clerks and porters and a strong tradition of railway families developed with sons following their fathers in working on the railway. Mr James Hewitt was station master in the 1850-60s and lived in the station house with his wife Harriet and two children -his son  became a railway clerk. Mr John Kind was station master for 32 years, he and his wife Elizabeth raised six children in the station house one of whom worked as a porter.

Figure 6 Mr Kind, his wife and six children and several other staff on the platform of Thurgarton station, about 1881 On their retirement in 1898 Mr and Mrs Kind were presented with a clock and a chair for 32 years of ‘ able and courteous service’  to the villagers of Thurgarton; sixty householders signed the vote of thanks headed by Bishop George Ridding who lived at Thurgarton Priory.

Figure 7 Mr and Mrs Kind on their retirement 1898 Mr Job Frederick Fisher followed in the 1890s and served as station master until 1921. He and wife Hannah raised eight children, six of which worked on the railways. The impressive size of these railway families suggests that the popular romantic notions of steam engines and railway stations are well based.

We know from contemporary accounts that people’s reaction to the coming of the railways varied from doom laden fears to wild enthusiasm.There can be no question that the new transport system was a significant factor in the increasing wealth and mobility of Victorian Britains. Thurgarton shared in this; for an agricultural community the mass movement of grain and livestock was vital for the larger farmers  but for the many smallholders of the village it was the sale of vegetables, eggs etc in the markets of Nottingham, now only 40 minutes away, that generated that extra bit of cash so important to their well being.

The opportunity of increased mobility over greater distances accelerated the preexisting pattern of movement of rural to urban communities but there is no evidence of a massive depopulation in Thurgarton  where census returns from 1841 to 1851  show a  modest growth in village inhabitants and for the rest of the century a modest decline from about 380 to 320. A study by O’Neil et al of mobility of Thurgarton inhabitants from 1841 to 1881 suggests that nearly half the village householders changed each decade; there was evidently much coming and going in this period and the railways must have been a factor in this mobility. Their study did not look at earlier pre-railway centuries and a brief study of village names from the 17th and 18th century suggests a much more stagnant population.

Railway outings to choral and flower festivals become a regular feature of the social calendar as did the annual Sunday School outing to Skegness or Mablethorpe – an occasion which continued upto the 1970s. 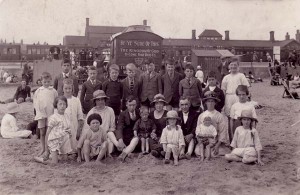 The coming of the railways provided generations of boys with a new pastime and for trainspotters young and old here are two old steam engines at Thurgarton.

Figure 9 and 10 Trains at Thurgarton 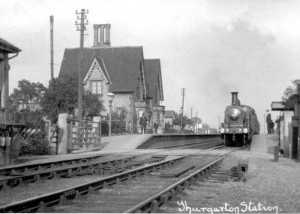 R Lelleux (ed.) A regional history of the railways of Great Britain Vol 9 The East Midlands, David and Chambers (1976).

I’m grateful to Mr Glynn Waite  for details and photographs of Mr Job Fisher and his family and to Mr Fisher’s great-great grandson, Clive, for permission to publish the photograph .

7 thoughts on “The coming of the railway to Thurgarton”