It is 12 miles long. Part of it lies only a few hundred yards from our back doors. We cross it if we walk to Hoveringham and we motor along a half mile of its length if we journey to Southwell. We can step along a large stretch of it if we walk the bridleway from Castle Hill to the Sheepwash Bridge. It is the parish boundary of Thurgarton.

Many years ago, before accurate maps, villagers would have ‘beaten the bounds’ of their parish at Rogationtide, 5 weeks after Easter. Led by the vicar and church vestry the parishioners paraded around the fields and lanes noting the landmarks which had for centuries delineated the parish limits. In some parishes the markers were beaten with willow wands but in some districts a more robust approach was adopted when the village boys were beaten or bumped at each major boundary marker ‘ to fix these matters in their minds’.

A perambulation of Thurgarton parish 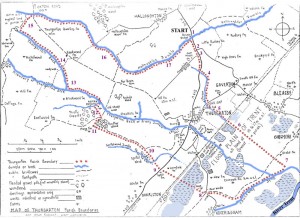 The boundaries to the parish of Thurgarton are a mixture of natural and man made features – streams, dykes, hedges, banks, tracks and carved stone markers. Our perambulation starts on the A612 at point 1 on the map and follows the boundary in a clockwise direction. 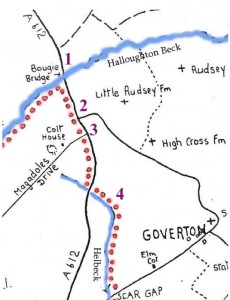 Point 1 – Here in a small dip the main road leaves Thurgarton parish as it crosses the Halloughton Dumble. The bridge was known as Bougie Bridge – an intriguing name which conjours up bogeys and troublesome spirits. There is a long tradition of a boggart living on the nearby Thurgarton Dumble; this mischievous imp terrified villagers with its loud screams, so much so that one vicar of Thurgarton attempted to reassure his worried flock by the rather unlikely explanation that the noise was that of a bittern.  Bogeys, boggarts and bitterns – who knows?

Point 2 – Following the A612 southwards one climbs a short hill on the crest of which is a sideroad to Bleasby marked by a large stone with the carving of a Green Man. This impressive monument was placed there by Bleasby Historical Society at the millennium; the location is close to a ‘High Cross’ which is recorded in 10th century documents.  Such crosses were often used a boundary markers especially in prominent positions in the landscape, as  here on the top of the hill looking down over the Trent valley, and where large landed estates met – the land to the south and west of this cross belonged to Southwell Minster whereas that to the north and west was held by Thurgarton Priory. 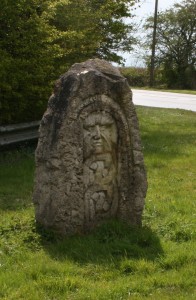 Point 3 – A few paces further on we come to a track on the right called Magadales Drive . The name can be traced back to 1250 AD when it was known as Maggot’s Cross. It has been suggested that Maggot was a variation on Margaret but an alternative is the possibility that this lonely spot was a place of execution and burials of criminals.

Point 4 – We follow the A612 south down a shallow dip at the bottom of which the parish boundary leaves the road and deviates to the left along a small stream, (called Helbeck on old maps) alongside the hedgerow which descends in a shallow valley to meet the Bleasby Road at Scar Gap Bridge. This is the closest point on the parish boundary from the village. 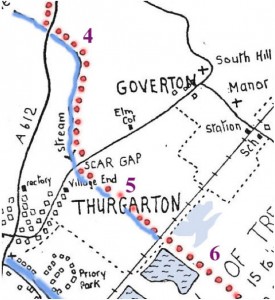 Point 5 – The stream and hedgerow  continues southeastwards to the railway line , this route was called Scargap Lane on old maps.

Point 6 – South of the railway the boundary runs between two flooded gravel pits (that on the west now a fishing club lake) and continues in a straight line for a mile to meet the southern parish limit near to Glebe Farm (now called Horsepool Grange). The boundary between Thurgarton and Bleasby was marked by a raised wide bank alongside a deep dyke. 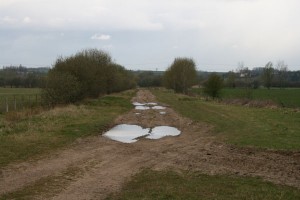 This major landscape feature was noted in 1897 by the Rev. Henry Williams, vicar of Bleasby,  who described it as ‘ a curious raised bank, which must have been constructed at considerable labour, which may be seen from the railway , separating Bleasby from Thurgarton , no doubt made by the authority of the canons of Thurgarton Priory as their boundary’. The vicar was not wrong for the bank and ditch are mentioned in the mediaeval records of Thurgarton Priory as Long Bank and Long Ditch or Sewer and later in Manorial Court records when digging out of the main ditch was a recurring task for the parishioners. Gravel extraction has drastically altered the landscape but one section of the old bank still survives but sadly is not a public path. 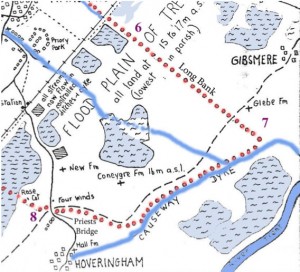 Point 7 – The boundary crosses the public footpath from Gibsmere to Hoveringham and joins the large Causeway Dyke (Nether Meadow Dyke on some old maps) which forms the southern limit of the parish. The footpath was once a major route from Nottingham to Newark heading through Gibsmere to the Trent crossing at Hazelford. Along this first stretch one can still see the wide lane between ditched hedges. 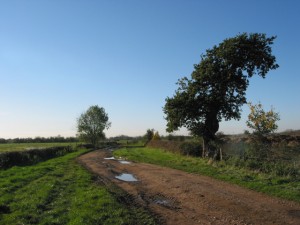 The Causeway Dyke flows into the River Trent 50 yards south of this point but our way is to the west along the footpath which roughly follows the dyke and boundary through to the Hoveringham Road. Along this route we pass south of Coneygre Farm (the name is derived from rabbit warren) and through the site of the deserted mediaeval hamlet of Horsepool.

Point 8 – The boundary crosses the Hoveringham Road at Priest’s Bridge; the name is probably related to the canons of Thurgarton Priory who controlled the parish and the river crossings. The boundary encloses Four Winds and Rose Cottage within Thurgarton parish and then heads north to the big lake. 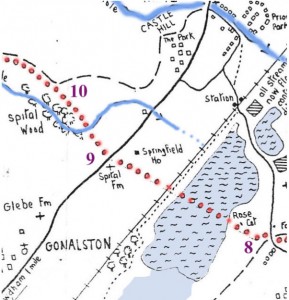 Point 9 – A straight line through the lake and over the railway line joins with an old hedge line that runs straight up to the east side of  Spittal Farm on the A 612. The origin of the name Spittal Farm is a mediaeval hospital dedicated to St Mary Magdalene founded by William de Heriz, Lord of the Manor of Gonalston in the 13th century. The hospital chapel and inmates were ministered to by the rectors of Gonalston until the dilapidated buildings were finally demolished in 1820 to make way for the present farmstead. 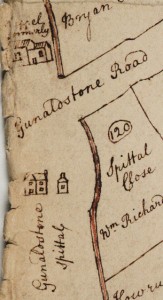 A settlement called Broadbusk predated the hospital; the name may be a corruption of Broadbush referring to a large thorn tree said to have marked the boundary here between Thurgarton and Gonalston. The boundary crosses the main road near to a culvert which drains water from a perpetual spring in the hillside above – this is Holy Well. Many holy wells and springs are known some with ancient pedigrees. The escarpment of the Trent Valley abounds with springs some of which had a reputation for healing and may explain the choice of this site for a hospital.

Point 10 – The boundary rises up the hillside by an old hedge line which runs east of Spittal Wood onto the top of a long ridge where it joins the bridle way that links Castle Hill and the Sheepwash bridge. 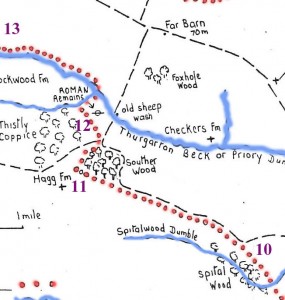 Point 11 – Walking along this path one follows the boundary hedge through five fields before the path turns sharply north through Souther Wood whereas the boundary passes around the far edge of the wood. The footpath continues down to the sheepwash bridge but the boundary line runs around Woodmeadow to reach the Thurgarton Beck

Point 12 – Woodmeadow contains a small Roman villa as does the small field immediately to its north-west over the boundary in Epperstone parish. Both villas were excavated in the 1950s. 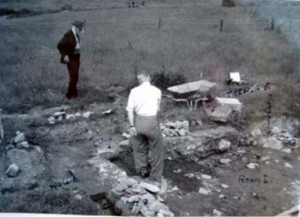 Point 13 – The boundary follows the course of the Thurgarton Beck which becomes an increasingly steep sided ravine as one follows it north –westwards. 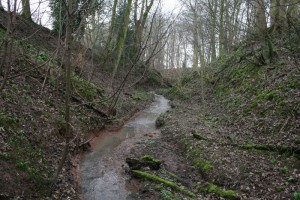 The old trackway from Epperstone to Halloughton crosses the beck at Ladywell bridge. The old threshing  barn at Ladywell has been converted into a modern dwelling. Ladywell was originally called Cresswell and appears as such in the early charters of Thurgarton Priory; the canons purchased the spring from the lordship of Epperstone probably to gain control of the major water sources that fed the beck which flowed past their priory. 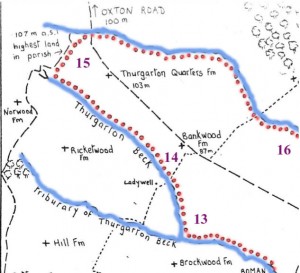 Point 14 – A few yards north of the bridge the diligent searcher will find an old marker stone bearing a large T for Thurgarton. It lies half way down the slope of the dumble on the Thurgarton side; take care it can be very muddy here so avoid times when the beck is in spate. The boundary continues along the Thurgarton Beck until it turns sharply westwards. 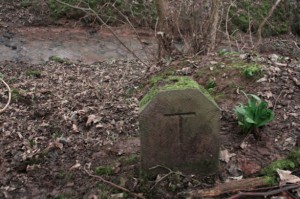 Point 15 This is the short northern edge of the parish just below Hollybeck Nursery. There is a footpath immediately north of the boundary hedge which comes out onto the old trackway that runs up the spine of Thurgarton parish from Thurgarton village to the Oxton Road. The boundary hedge is banked and ditched along this short stretch and may be the remnants of a deer fence for the Norman park at Thurgarton.

Points 16 and 17 – The boundary crosses the trackway and turns south-eastwards to follow the Halloughton Dumble for over 2 miles before finally crossing the main A612 at Bougie Bridge – our starting point and so completing the circuit. 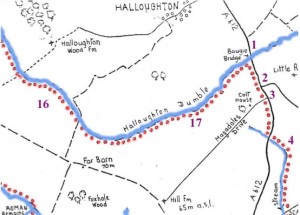 Aerial photographs (from the 1950s) of the final field by the main road show a raised bank or trackway paralleling the Dumble ; this is now completely ploughed out but may have been another boundary bank or deer fence. 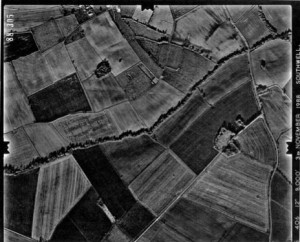 The basic parish structure of England is very old; it was certainly established  by the 10th century and may date back to much older land boundaries. The parishes immediately to the east of Thurgarton are recorded in a land charter of 956 AD when King Edwy granted Southwell and the surrounding land to the Archbishop of York; as with Thurgarton, streams, dykes, hedges, trees and  trackways were used to delineate the boundaries.

Unfortunately most of Thurgarton parish boundary is on private land and only a few stretches can be walked by the public. The map below shows those locations where the boundary is crossed by public roads or paths ( green stars) and those few sections where a path or road follows the parish boundary ( green line). 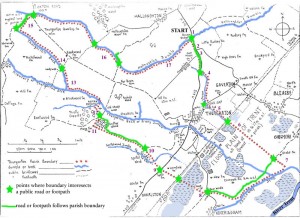 Boots Archives,  Record of excavations of Roman building in 1950s at Woodmeadow, Thurgarton