Historians have traditionally concentrated on the ‘top’ families of society, the movers and shakers of their times, but it was the ordinary householders who wove the real fabric of village life. In the case of Thurgarton it was those families who for  generations had toiled as farm labourers; one could choose many examples but here is one family – the Featherstones.

Arthur Featherstone and horse team in a ploughing match 1950s 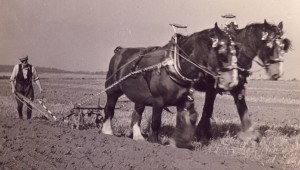 Arthur and his wife Elsie lived at Bramley Cottage on Bleasby Road; they had no children and were the last of several generations of  Featherstones who lived in Thurgarton. The Featherston(e) name first appears in the Thurgarton parish records in 1711. 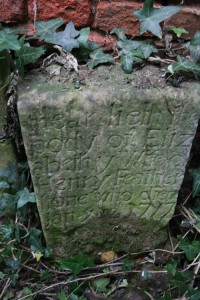 The next entry for a Featherstone in the parish records is that of 9 July 1727 - the  baptism of  Henry base son of Mary Featherston.

Illegitimacy was not uncommon and most cases were recorded in the stark words ‘ base born’.   Besides questions of morality the main concern for the parish authorities was financial – who would support the single mother and child?  In 1727 the responsibility rested on the parish and each villager paid into a local parish fund for the support of needy parishioners – the parish Poor Rate. The identity of the child’s father would have been  vigorously pursued by the parish officers especially the Overseer of the Poor. If single the man was often ‘persuaded’ to marry and provide for the new family – to the relief of both the village’s moral majority but more importantly to the parish rates.

The church wardens’ records of 1727 mention one Joseph Hall as the child’s father but no  marriage took place . Three years later Mary married Richard Stubbins – 1730, 2nd March  marriage between  Richard Stubbins and Mary Fetherstone. Richard and Mary lived on Beck Street in the cottage that is now called Appletree Cottage; he paid £3-18-10 per year in rent for his house and two acres of land.

House and orchard of Richard Stubbins -1730 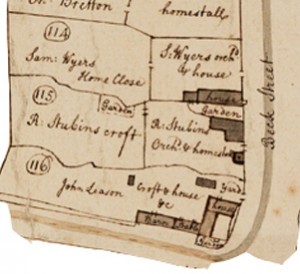 They had six children of which only three survived. In 1733, 1734 and 1737 Mary gave birth to a daughter; each one was baptised with the name Elizabeth but none survived beyond infancy. Estimates of infant mortality in the 18th century for England vary somewhat – about 1 in 3 children died before reaching the age of 1 year. The repeated use of the same Christian name, as seen with Elizabeth in the Featherstone family above, was quite a common practice. At the same period the Hart family of Old Farm, Thurgarton had three daughters each christened Anne of  which only one survived- the Harts were yeoman farmers but wealth evidently did not protect against the loss of a newborn child.

Edward Featherstone was a farm labourer and married to Hannah.

In 1825 Hannah gave birth to twin girls, Anne and Mary, but sadly both died within a few days. Infant mortality remained high through the early 1800s and twin births especially in winter were very vulnerable. Within a few years Edward and Hannah were the parents of three sons, William, Edward and John, and a daughter, Mary, who was born in January 1832.

Edward Featherstone earned 12 shillings per week as a farm labourer with an extra 2 shilling in the longer working days of the summer harvest.  He paid an annual rent of £3 for a cottage and garden. Remarkably the Featherstones had £ 25-19-1 in a savings bank in Southwell. This was a considerable sum for a labourer’s family and  implies a hardworking and thrifty household with some hope of betterment.

Tragically Hannah died in June 1832 at the age of 36 years leaving Edward to raise four young children the youngest only 6 months old. A mere three months later in September 1832 the burial of Edward Featherstone is recorded in the parish register –he was 31 years old. We have no details of the cause of death for Hannah or Edward but in Edward’s case one can speculate on his state of mind after the loss of his wife.

Once again the parish was faced with the question – who would care for the children , William aged 9, Edward 6, John 4 and the baby Mary ?

In 1832 the poor of the parish were the responsibility of the Poor Law Guardians. The fate of these newly orphaned children lay with such men as Thurgarton’s  vicar, Thomas Becher of Southwell, a vigorous proponent of the  parish workhouse system and Richard Milward the squire of Thurgarton . What happened to the £25 in the bank is not known.

The register of Southwell Workhouse for 1833-6 records the fate of Edward and John.

William the oldest boy was evidently old enough to work as a farm boy (see below) but we have no further information on the baby Mary – she may have been adopted.

The life of an orphan in 19th century workhouses varied from the awful extremes of a Dickensian novel to more enlightened regimes of care and usually depended on the attitudes of the Board of Guardians and the personalities of the Master and Matron. The workhouse at Southwell was based on a harsh regime which discouraged the ‘feckless poor’ from seeking admission. The Featherstone boys were orphans and would have been regarded as the ‘blameless poor’ ; nevertheless they would have been subjected to strict discipline and an education designed to make them fit for work suitable to their class.

We next pick up the three Featherstone boys in the 1841 census.

Bankwood and Hill Farms are about 1 mile apart and in 1841 were owned by Richard Milward ( Chairman of the Board of Guardians at the workhouse) and were occupied by tenant farmers. The census records several farm servants aged 15 or less at both farms.  There is overwhelming evidence of the cruel exploitation of workhouse children as cheap labour in the factories and mills of England and it would be easy to portray the fate of these three Featherstones boys as yet another example of such practices but one cannot be certain of their circumstances. They at least were returned to their home parish and lived close together and whilst wages would have been low they were provided with board and lodging and a form of apprenticeship as farm workers.

Only John the youngest boy can be traced further through the parish records. In the 1860s he and his family received 2s twice a year from the church charity fund. He continued to work as a farm labourer and appears in the census returns of 1871 and 1881 - he lived at Hill Top Cottage above the Red Lion Pub.

The younger son William continued to work as a farm labourer and remained at Hill Top Cottage where he and wife Mary raised a large family seen in the following census records. 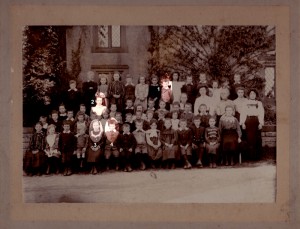 Two Featherstone boys served in the forces in World War 1. One of the boys was tragically killed at Bankwood Farm in the 1930s when he was caught by the drive belt of a threshing machine.

Arthur had started working life as a chauffeur at Thurgarton Priory but then worked for many years for farmer John Thornton who owned Old Farm in Thurgarton. One of his main duties was ploughing with a team of shire horses. He and Arthur Crowder of Beck St would rise at 5am; after feeding, watering and harnessing, the horses were led out to till the arable fields with a single blade plough. It was a long day of backbreaking work in all weathers. Not surprisingly he left farming in later life and took up a less physically demanding job at the nearby Hoveringham Gravel Company as a loco driver; his friend Arthur Crowder followed him a few years later. 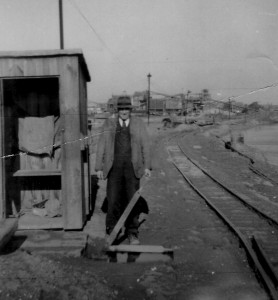 Elsie Featherstone, known as ‘Feathers’ to her neighbours, had worked as a maidservant at Thurgarton Priory. She was a formidable woman. A keen gardener she was much annoyed by her neighbour planting a stand of poplar trees which shaded her vegetable plot, and she took to a nightly covert ritual of shaking the trees vigorously which eventually succeeded in killing them off.

Arthur was a quiet man, sober and careful with his money – one wonders whether the family stories of hardship and poverty moulded his attitudes. If one inspects the photograph of Arthur and his horse team in the ploughing match one can see from the immaculate preparation of the horses and his concentration that here was a man who took pride in his work and no doubt some pleasure in a job well done.

The Featherstones were not unusual, their story and similar ones can be found throughout the countryside but it was such households who formed the backbone of rural communities in England.