Very few of the travellers who speed through Thurgarton on the A612 will notice the Old Rectory, a handsome white house set in beautifully manicured grounds next to the main road. This article looks at the history of the house and of some of the families who lived there.

The house and grounds are first reliably recorded in a map and survey of 1731  commissioned by Trinity College, Cambridge who were granted Thurgarton village and the southern half of the parish by Henry 8th in 1541. 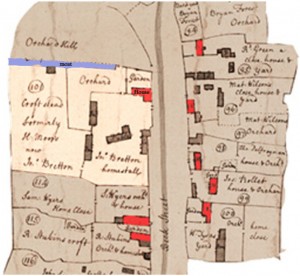 The house and grounds are highlighted in map1. It was the largest property in the village, second to the Priory, and contained a house, yard , barns, stables, dovecote, garden, orchard and a home close or croft bordered on the north by a moat (blue in map1). The survey refers to the homestead as College Farm and the house  which was built of brick and tile as The Manor House.  Almost certainly this is the house referred to in Thoroton’s History of Nottinghamshire  ‘Mr John Cooper built a brick house in the middle of the town on one of the farms’ . John Cooper was a staunch Royalist in The Civil War ( see article on Thurgarton in the Civil War). He returned from exile with the Restoration of Charles II in 1660 and died in 1672. His older brother Cecil lived at the Cooper mansion, Thurgarton Priory, and presumably John built The Manor House for himself sometime between 1660 and 1672. It would have replaced an earlier farm house of which we have no record.

In 1730 the Manor House and farm had recently changed hands, the previous tenant, Henry Moore had moved to Morton and the new tenant was John Brettle (misspelt Bretton in map 1). A succession of John Brettles occupied the Manor House from the 1730s up to the 1840s.

The Brettles were an extensive Thurgarton family who rose from relative poverty to become one of the wealthiest farming families in the district. The first Brettle in parish records is Nicholas who in the first decade of the 1600s served as a juryman in the manor court and rented a modest cottage and landholding from the College. Numerous Brettles subsequently appear in the parish records and whilst it is not the intention of this article to trace an accurate family tree at least two Brettle households emerge in the 17th century.

The first family was that of Thomas Brettle who died c 1665. He was a blacksmith and in his will he left over £50, clothes, pots and pans and a feather bed to his two daughters and the rest of his estate to his older son Mark. The younger son John got the family Bible!  Son Mark evidently did well with property at Thurgarton and Upton which he divided between his two sons, Matthew and John, in his will of 1705.

The second household is that of another John Brettle who did even better for himself. He was one of the larger farmers in the parish but farming was not his only source of wealth. His will of 1701 lists a remarkable number of outstanding debts owed to him by prominent members of county society. In the 17th century.  Before the establishment of a modern banking system, a source of ready cash was often a problem even for wealthy landowners and  John Brettle evidently had sufficient cash to become a money lender. An impressive total of over £1400 was owed to him by several members of the gentry including Cecil Cooper of Thurgarton Priory and Lord Howe of Epperstone (we don’t know what interest was charged on these loans). This John Brettle described himself as a’yeoman’ – a step up from a farmer but not quite a gentleman. He appears not to have married or left any children and his estate passed to his two nephews William and Henry Forest who had the task of reclaiming their uncle’s debts (Henry lived at Priory Farm).

18th century  The Brettle family’s good fortune continued into the 18th century and again two main households of Brettles can be traced in Thurgarton. John and Grace Brettle at The Manor House , John was the largest farmer in the parish renting over 100 acres. Thomas and Mary Brettle lived at a homestead which is now The Hollows on Priory Road; Thomas also rented a considerable acreage of land. Thomas and John Brettle served for many years as church wardens and evidently were promiment members of the parish establishment. 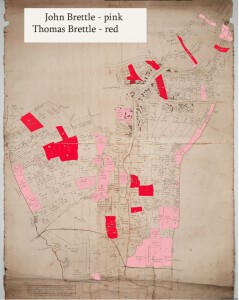 The village survey and map of 1799 shows a John Brettle living at The Manor House  now described as an old brick and tiled house with barn, stable, dovecote and other outbuildings; his land holdings had increased to over 200 acres of arable and pasture land. 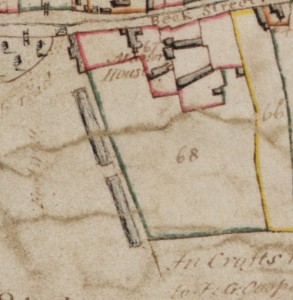 In an 1813 survey the Brettles had built a new extension to the house which can be seen on a later map of 1845. 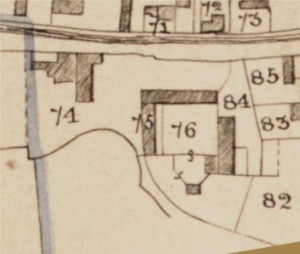 The last John Brettle to live at The Manor House died aged 65 in 1829; his widow Mary lived on for another 11 years (her grave stone lies on the floor of the chancel in St Peter’s church). The Brettles were now wealthy with interests in land, malting  and the Southwell bank of Wylde Bolger and Brettle. The Brettle fortune went to their daughters one of which (another Mary) in 1826 married the Rev. Thomas Coates Cane the son of a wealthy Southwell clergyman.  With this marriage the Brettles had finally reached the social status of gentlefolk ; over a span of two centuries they had climbed the social ladder from cottager to farmer to yeoman to gentleman.

The newly married couple were wealthy and built Brackenhurst Hall as their new family home in 1828; they would have need of a large house for by 1850 they had nine children and more to come.  This large house overlooking Southwell is now an Agricultural College and  part of Nottingham Trent University.

One of  Thomas and Mary’s grandchildren was General Edmund Allenby, one of the more effective British military leaders of World War 1. Nowadays he is best known for the exploits of one of his junior officers, T.E.Lawrence of Arabia, but at the time Allenby was the celebrity. The liberation of the Holy Land from the Ottoman Empire was viewed by many as an event of biblical importance and Allenby’s entrance into Jerusalem one of the most famous photographs of the time. 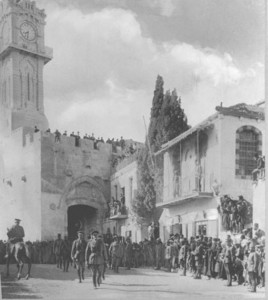 In 1848 the vicar of Thurgarton died – he was the Rev. Thomas Becher who had resided at Southwell and was an uncommon visitor to his flock at Thurgarton or indeed to several other parishes in the country where he held the church living.  The livings of Thurgarton and nearby Hoveringham were controlled by Trinity College Cambridge who in 1848 decided to combine the two so that ‘ the joint living so augmented would render it acceptable to a fellow of the College’.  Trinity College Cambridge was a mainstay of the established church and churned out generations of Anglican clergymen  – usually the younger sons of the gentry.

1848 plan, the house is unchanged from 1845 but the outbuildings largely cleared 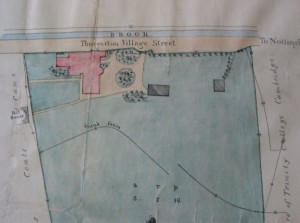 The local agent for Trinity College was a Mr T S Woolley who suggested building a new stable and coach house to the north-west of the house next to Beck St. The Manor House  was described as part old with low ceilings and part modern especially a new living room and study. There are few details of the alteration to the house but it was reduced in size and may have acquired a new roof of slate (a fashionable roofing material at the time).

Map of 1882 shows the parsonage and outbuildings. 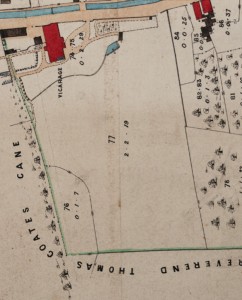 In 1848 the Rev. Henry Lea Guillebaud  MA became the first vicar of Thurgarton and Hoveringham to live at the parsonage.  The son of a Somerset clergyman of Huguenot descent he had followed his father’s footsteps into the church after gaining a MA at Trinity College Cambridge in 1841. He married in his late 30s and he and wife Jemima raised five children at Thurgarton. He left the village in 1872 shortly after establishing the Church of England village school.

In 1873 the Rev. Atwell Mervyn Yates Baylay  MA  moved in as the new vicar along with his young wife Alice followed by the arrival of three sons and then four daughters. They remained in Thurgarton for 47 years, retiring in 1920. Atwell Baylay was a keen historian (vice president of  the Thoroton Society ) and an acknowledged expert on liturgy and ancient church music; he translated and edited Batiffol’s Histories of the Roman Mass and the Breviary and was the author of  A Century of Collects (Alcuin Club publications). 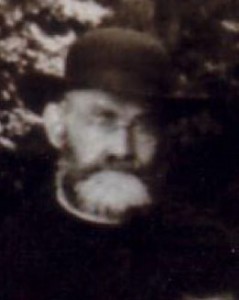 In character he was a reserved scholarly man, somewhat distant and other worldly but unfailing in his priestly duties. He great love of church music meant a busy time for the choristers with frequent rehearsals including his own arrangements of ancient chants and masses. Two of his sons served in the forces in World War 1 and Charles (baptised by his father in 1876) was killed in action in 1917 and is commemorated on the village war memorial.

Over the following 20 years three further vicars of Thurgarton and Hoveringham lived at the parsonage  – 1920 Vincent Taylor Kirkby MA, 1928 William Basil Evans and 1935 George Herbert Halstead. The Rev. Halstead found the house too large and difficult to run and so a new modern vicarage was built on Thurgarton Hill.

The parsonage passed through several tenants during the war following which it was purchased by the Wigley family who sold ‘The Old Rectory’ as it was renamed, to the Farr family in the 1960s.

Hordern Farr was a director of The Home Ales Brewery in Daybrook, Nottingham and a keen sportsman. He had an impressive amateur record at football and enjoyed tennis and shooting but it was cricket that remained his life long passion and he served as president of the village cricket club.

A tennis court and outdoor swimming pool appeared in the grounds of the Old Rectory. 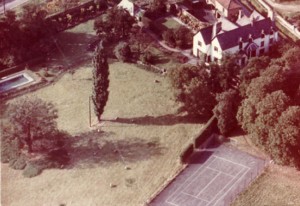 Over the 25 plus years that the Farr family lived at The Old Rectory the house and gardens hosted numerous Garden Fetes and Strawberry Teas raising funds for charity.

Garden Fete at The Old Rectory 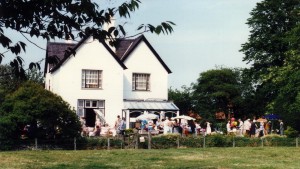 Hordern Farr sadly died in his 50s; his wife Jenny and their three children continued a close energetic involvement in village life and Jenny also served as president of Thurgarton Cricket Club. 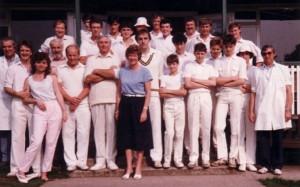 The Farr family left the village in the late 1980s since when the house has passed through the hands of several families. A large house, Rectory Cottage, has been built on the site of the tennis court but otherwise the buildings and grounds are essentially unchanged from the old parsonage of 1848. 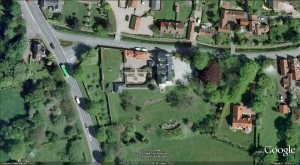