The Illustrated  London News came out in May 1842 and was the first illustrated weekly newspaper in the world.

Front page of the first issue  Illustrated London News May 1842

In this first issue was a short column titled  ‘ Nooks and Corners of Old England’ which featured Thurgarton church. The article, written in rather flowery language typical of the time  by one G G P,  is reproduced below together with the accompanying illustration of Thurgarton church by H. Dixon.

This picturesque rural temple is used as the parish church of Thurgarton, although belonging to a private individual. It has its simple and pleasant locality about two miles from the banks of the Trent, in a beautiful district of Nottinghamshire, and upon the borders of the ancient Forest of Sherwood – dear, merrie, memory haunted Sherwood- the fairy region of the ballad-singer and one of the evergreen homes of old English romance. The character of the scenery which once surrounded this old ruin is, however, of altered aspect now – its forest features are worn away- it is subdued into the mild stillness of pastoral vegetation, and wears the sweet, untroubled calm of holy natural repose. 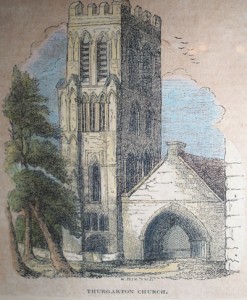 The Priory of Thurgarton was founded by Ralph de Ayncourt in the time of Henry 1, for the good of the souls of all branches of his family, and committed, with holy charge, to the care of St. Peter, to whom it was religiously dedicated. The principal records concerning the once famous priory was held by the Chapter of Southwell, and are contained in one volume, the others having been burnt by Cromwell in his crusade against the Catholic Church.

Of its exterior, the most attractive remaining portions of this once glorious edifice- amongst which should be first named one of the two former western towers- are the western entrance, now used as a window; the north porch which has been badly rebuilt; two early decorated windows of good character; and a very rich niche which is in the pier that in the interior divides these two windows. A description of it might be too architectural, but we must say that it is a gem indeed. The narrowest arch of the western entrance measures about eight feet, and the widest about eighteen feet, having in its mouldings six rows of dog’s tooth ornament. We find this church nearly perfect up to the time of the civil wars; but Cromwell having passed through the village quietly, was afterwards attacked from the church towers, in return for which he reduced it to its present state*; in which we leave it; with only an intimation to the curious that it is near Nottingham, Newark, Southwell and Newstead and 140 miles from the metropolis.  G G P

*As often happens, the wrong Cromwell is blamed in this article for the reduction of the church; it was Thomas Cromwell not Oliver who was responsible for the surrender of the priory in 1538 and its subsequent reduction to a parish church.

Dixon’s  illustration of 1842 shows the west front of the church before its restoration in 1854 by local architect, T C Hine, and lacks the three lancet windows above the west doorway shown in a recent photograph. 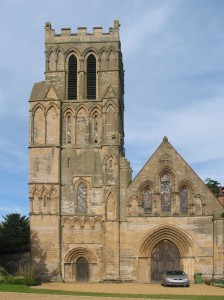 Why Thurgarton church was chosen for this first issue of The  Illustrated London News is not known but the newspaper’s founder, Herbert Ingram, had been a printer and newsagent in Nottingham in the 1830s and may have visited Thurgarton during this period.

‘G G P’,  the author of the article, was George Gordon Place a Nottingham based architect.

Any further information on the  illustrator,  H Dixon, would be most welcome.