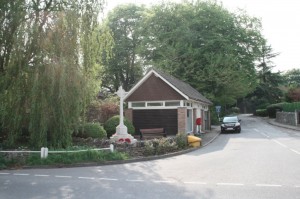 This recent photograph shows Thurgarton village war memorial standing in the centre of a small enclosure surrounded by a low stone wall – all that remains of the village pinfold.  The building beyond the memorial, now a beauty salon, was built in the 1960s as a village shop – the Priory Stores 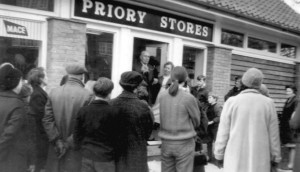 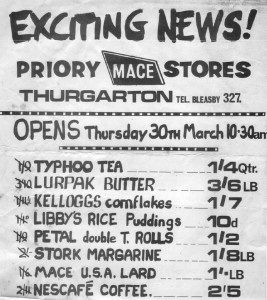 It later doubled as the village post office as well as a shop. 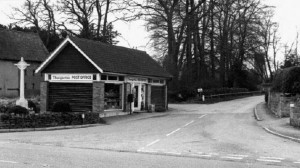 Mr and Mrs Williams ran the shop for many years – this photo was taken at  their leaving party. 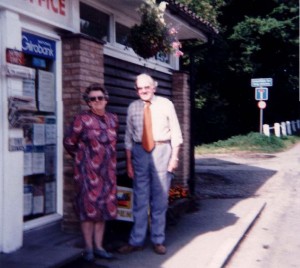 In the 1990s Brian Noble took over but sadly the Post Office was repeatedly targeted by robbers  -on one occasion armed with a shotgun. 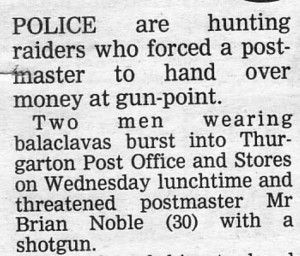 The last post master was Mr John Holland who continues his links with the village as Parish Clerk.

Before the shop and post office the site was occupied by the old village smithy. 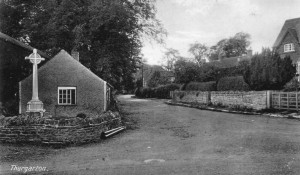 The large building behind the smithy in this photograph was a Dutch barn which can be seen more clearly in the view below –it was demolished in the mid-20th century.

The Milners were the last family of village blacksmiths to work at the forge. In the photograph below Harold Milner and son Douglas are shoeing a cart horse from Manor Farm owned by the Bentley brothers. Harold Milner recalled the dangers of working with horses -  he had been laid up for 3 months after being kicked by a horse but much worse was the fate of Robert Bentley of Manor Farm who had died aged 25 in 1915 after a horse kick at the forge.

The Milners shoeing a cart horse at Thurgarton smithy 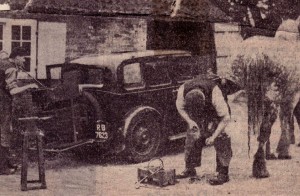 The Milners lived across the main road from the forge in one of the cottages next to the Coach and Horses (now the pub kitchen).

The smithy and cottages at Thurgarton cross roads. 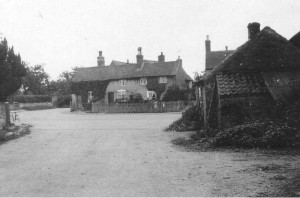 Looking further back the smithy and pinfold are clearly seen in a map of 1882. 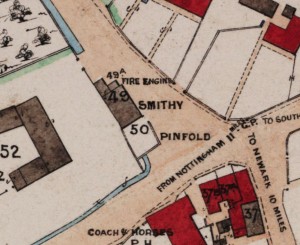 At the far end of the smithy in a small lean-to was the village fire engine – we have no record of it being used in earnest but fires were all too common in cottage chimneys and hay stores. 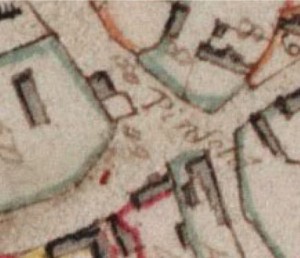 – but in 1731 there was no forge but a much larger pinfold labelled ‘Pound’ on the map. 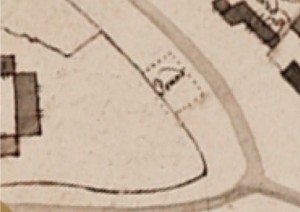 The original pinfold or pound was not only larger but its walls would have been higher for it served as a pen for stray livestock. Most parishes employed a Pinder whose duties included the impounding of stray animals in the pinfold; we have no record of a ‘Pinder’ in Thurgarton but the parish Constable probably took on these responsibilities. Stray animals were a constant problem in agricultural villages; besides the danger to human life and limb of a rampaging bull or horse, stray beasts could cause serious damage to crops in the old open field system. The old maps of Thurgarton show gates across the roads and lanes especially at the edge of the village plots  - such gates were used to control the movement of animals.

Once impounded a beast was not released to its owner until a fine was paid. One can imagine the many disputes between the farmers and the parish officers – there are numerous stories of farmers racing to the village pound to prevent their livestock being corralled or covert attempts to smuggle their beasts out of the pinfold at night without payment.

The pinfold was also used to impound household goods or farm tools of villagers who defaulted on paying their parish dues – the shame of such a public display of one’s affairs  usually led to a rapid settlement of arrears.

The Thurgarton pinfold became redundant in the late 1700s with enclosure of the parish fields; about the same time the village smithy, previously on Castle Hill, moved into the village centre occupying half of the old pinfold.