Before Thurgarton had a village hall it had  ‘The Hut’. The Hut was known officially as The Thurgarton Mens Institute and was established in 1921 as a recreation room for the village. It was an old World War1 army hut  which was sited on the same plot as the present village hall.

Fred Farrands and friend are working on the roof of the Hut. 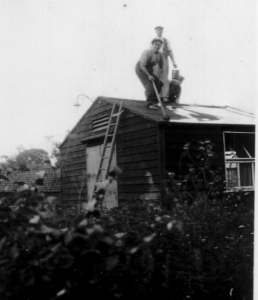 This was a period of post-war depression and the stated purpose of the room was for the recreation and instruction of the young men of the village – the unstated purpose was to provide an alternative to the two village pubs. Membership was confined to village men over 15yrs and cost 1 shilling per month. It was open from 6 – 9.30 pm.on Monday to Friday and one of its main attractions was a billiards table available at 1 penny for 30 minutes play. Gambling and alcohol were strictly forbidden.

A Mr F. Warrener was appointed caretaker and was responsible for cleaning and lighting a fire as well as collecting the fees for the billiards table. All seemed well for the first 18 months but some disquiet was voiced in the committee regarding Mr Warrener’s apparent lack of attention to his duties and the small return from the billiards table despite its popularity. Things came to a head at a special committee meeting in February 1923 when Mr Warrener was summoned to the Hut to account for himself. His mates gathered outside.

The minutes simply state that “ owing to the behaviour of some members of the institute, the interview with Mr Warrener was abandoned” and that the committee members “ expressed the opinion that they were not there to be insulted by those they were trying to help”.

Despite such problems The Hut became the village centre  for an increasing number of community events and celebrations until it was replaced in 1957 by the present village hall.

In  1954  the Masters, Fellows and Scholars of the College of the Holy and Undivided  Trinity at  Cambridge agreed to lease the plot of land off Bleasby Rd to the Trustees of the new Thurgarton Village Hall for a term of  99 years at the nominal sum of one shilling per year.

The lease was signed by Frank North and Rev. F. Jessup on behalf of the village community and organisations.

The new wooden village hall was completed a few years later replacing the old Thurgarton Village Institute (The Hut). The hall has undergone one major extension and  several refurbishments and redecorations over the decades - the latest major one in 2005. 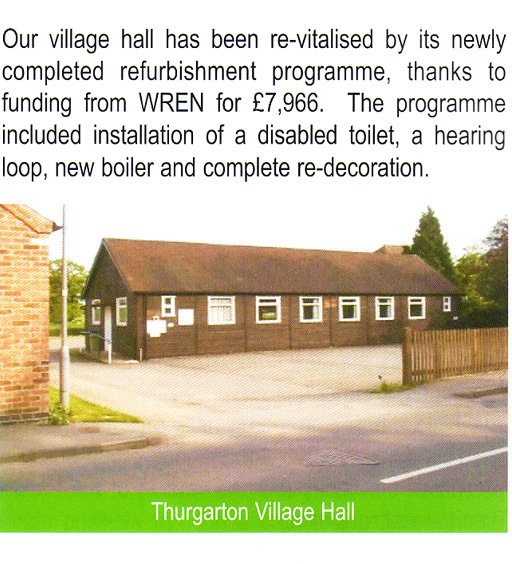 The hall has been the central focus for most of the village events  – some, sadly now defunct, are remembered below.

Who can forget the annual village show which provided hours of innocent entertainment – a platform for would be stars of the stage and exhibitionists – an occasion when children began to wonder about their fathers.

Here is a taste. 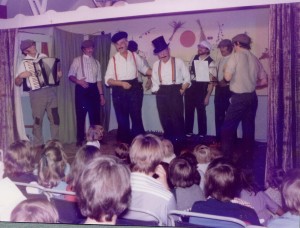 Belly dancers (not be viewed by those of a nervous disposition) 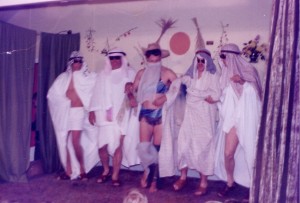 A prize for anyone (except Mr A. Blyth ) who can identify the man in the blue wig below. 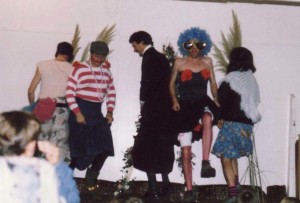 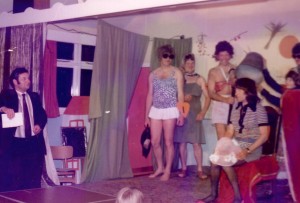 Let us, dear reader, avert our eyes from this scene and seek more uplifting matters. 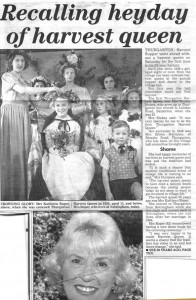 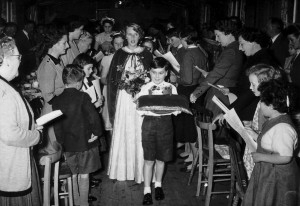 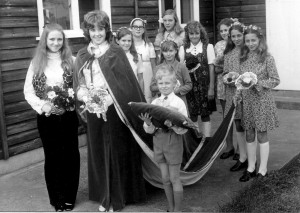 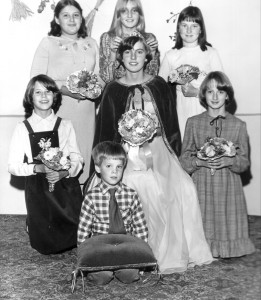 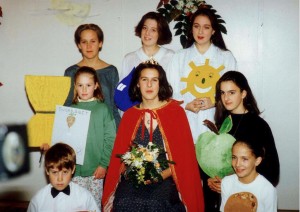 Each October a harvest tea (two sittings) was held in the village hall and the new queen paraded through the hall with attendants for the crowning ceremony.

Harvest queen Lynn Jowett and entourage parade through the hall 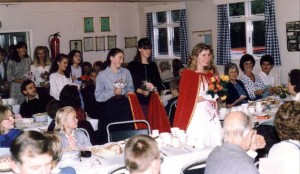 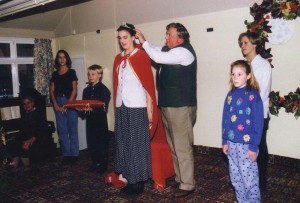 The village flower and produce show 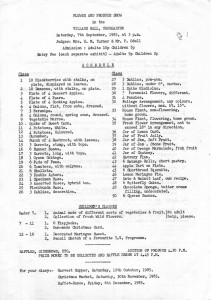 Competition was keen and nervous hours were spent waiting for the judge’s verdict followed by the rush to find the winning red rosettes. Some villagers attempted an air of sang froid and ambled in a few minutes later but could not hide their exulatation at winning  a 1st for a plate of damsons or disappointment at finding their runner beans unplaced.  Especially galling were comments from the judges such as “ always leave the calyx on the tomato”, or “ bread too fresh for showing – use day old bread” and the downright insulting  “ always clean the jar thoroughly before filling with jam” or “ pastry too hard”.  Nowadays counselling and debriefing sessions would be mandatory.

The overall points winner received a fine cup  – for decades this went to Albert Holmes of Beck St who produced unrivalled vegetables and jams. 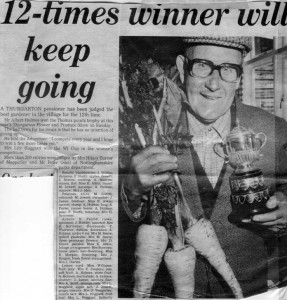 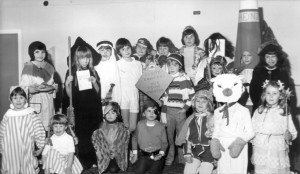 Dances – where are the men? 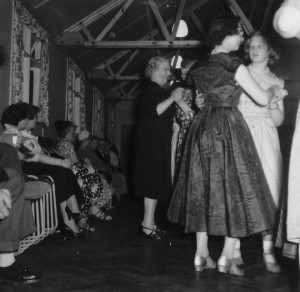 and tea and games for the Silver Jubilee in 1977 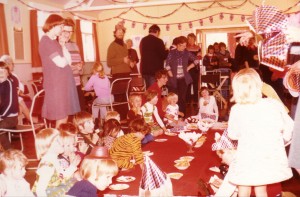 The village hall has served the community well – our thanks to the many who have worked so hard over the years.

Three more photographs of Thurgarton Harvest Queens have just been sent from David Bellamy who writes ‘My name is David John Bellamy and I was born in Thurgaton on the 27th July 1946. My father was Percy Bellamy and we lived in a cottage at the top of the hill. The cottage belonged to Mr Wigley and my father was his Gardener. Mr Wigley lived in the big house opposite the school. I believe my father was friendly with the Bentley Brothers. I attended the school from 1951 until we moved to Oxton in 1952 and I have 3 pictures of what I believe to be a Harvest Festival involving school pupils from that time. I am the boy carrying the cushion/crown? There are very few pictures on the Thurgaton Web Site from around this era. Please feel free to use them on the Web Site if you wish. We may get some feedback! 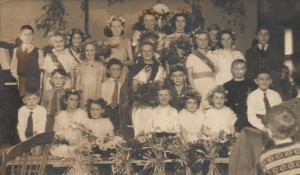 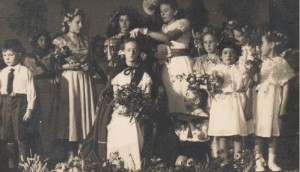 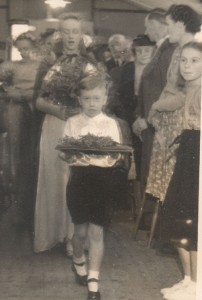 Can anyone identify any of the children?

2 thoughts on “Thurgarton Village Hall and The Hut”