At the height of World War 1 over a million letters and postcards were delivered each day to and from the front. Postcards were especially popular as they were quick and easy to write and easy to scrutinise by junior officers who acted as censors. Images varied from the sentimental to the worthy and patriotic but as the war stretched on humour became increasingly popular and cartoonists such as Fred Springer, Bruce Bairnsfather and Donald McGill became household names. 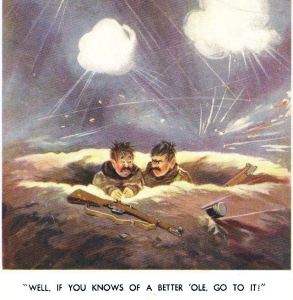 Postcard dated 26th December 1915 addressed to Mr(s) R H Barker at Thurgarton Priory with an image of the church at Bethune. The town was a major army and hospital headquarters during the war but in 1918 during the German offensive it suffered severe shelling and the church was left in ruins until it was rebuilt in the 1920s.

The message reads ‘ I have not had time to write the last two days but will write today. No mail yesterday at all as I expect there were no boats’. 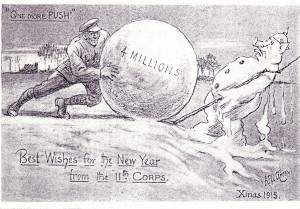 The second postcard, written in the same hand as the first card is signed by ‘ Dick’ and  dated 28th December 1915 ( two days later) and again addressed to Mr(s) R H Barker at the Priory. We have no other record of the Barkers at Thurgarton – any further information would be welcome.  The message reads ‘ The last letter I had from you is dated Dec 19! you must be very busy. This p.c. designed by our own tommies and specially made for our Brigade! Will you send me an Old Moore’s Almanack out.   Yours    Dick’

The image, drawn by A F U Green, shows a powerful Tommy about to engulf a pig-headed Kaiser snowman with ‘One More Push’ of a giant snowball which represents 4 million allied troops. The card wishes ‘ Best wishes for the New Year from the 11th Corps’.

The British army had just suffered over 60,000 casualties in the autumn of 1915 at the Battle of Loos known as ‘The Big Push’. The use of the phrase ‘ One more push’ in this postcard of Christmas 1915 was an obvious attempt at boosting morale amongst the troops and the home front – such cards, supposedly designed by ‘our Tommies’, were part of an increasingly sophisticated propaganda campaign. 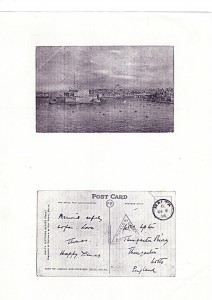 The third postcard was sent from Malta on December 9th 1916 by ‘Thomas’ to Mrs Upton at Thurgarton Priory. The image is a view of Fort St. Angelo and the Dockyard Creek at the Grand Harbour at Valetta.  The message reads ‘ Arrived safely so far . Love.   Thomas.   Happy Xmas’

‘Thomas’  is Captain Thomas Upton of the King’s Own Yorkshire Light Infantry; in late 1916 he was 21 yrs old and was en route to join the 1st Battalion then part of the Allied forces serving in Salonika. His parents, Archer and Charlotte Upton. were living at Thurgarton Priory  with his paternal grandmother, Mrs James Upton and his aunt and uncle  – Edward and Edith Usborne ( nee Upton).

Thomas Upton’s regiment was transferred to France in 1918 and on 8th November 1918, a mere three days before the Armistice, he was killed in fierce fighting near Douriers. His grave is one of three war graves in the small churchyard at Semiouses.

His cousin, Lt. Guy Usborne RN, was killed in 1919 when the British fleet attacked the Bolshevik forces at Kronsdadt. The war memorial in Thurgarton was erected by Mrs James Upton and includes the names of both her grandsons amongst the village men remembered there. 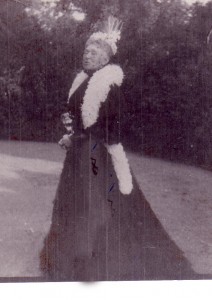 Documents and photographs left at Thurgarton Priory by Boots .