Until recently little was known of the library of Thurgarton Priory which shared the fate of most monastic libraries which were either dispersed or destroyed at the Reformation.

A third book however has recently emerged as another survivor from Thurgarton Priory. Within the depths of the British Library is a rather unimpressive leather bound volume, reference MS Sloane 3548. It contains over 160 pages dating from the 15th century most of which are medical texts in Latin. The origin of the book was unknown until recent inspection under UV light revealed a previously unseen note at the bottom of  page 26 which read ‘Liber Roberto – canonici de Thurgarton’ (the book of Robert – canon of Thurgarton).

The book held one further secret  – on page 158 was the catalogue of a mediaeval library with a list of over 150 works on religion, history and natural science. This is a book list from the 15th century library of Thurgarton Priory.

The majority of books were works on religion and theology from early commentaries by church fathers to later mediaeval works such as those by the English mystics, Rolle and Hilton. Hilton was a canon at Thurgarton Priory in the late 14th century and the library includes his books and some of his letters. The books on religion however did not survive the Reformation and only those on medicine, astronomy and the cartulary were preserved – a pattern of selective destruction common to many other monastic libraries.  Indeed Henry VIII commissioned antiquary John Leland to tour the major monastic houses of the realm and identify books of particular value or interest (especially natural science); Leland visited Thurgarton Priory just after its surrender in 1538 but left no detailed comment on the house or its library.

The surviving books from Thurgarton Priory

2 On Astronomy and Astrology (MS 358 Royal College of Physicians, London)

Within the 120 pages of this book are notes on stars, planets, the sun, the zodiac, the construction of an astrolabe together with lists of astronomical measurements.

Tables of  star positions including Rigil at the foot of Orion

Its attribution to Thurgarton Priory derives from entries of astronomical measurements for ‘Thurgarton’- one example on p 25 is a list of latitude and longitude for  Babylon, Oxford, London, Rome, Jerusalem, Alexandria, Thurgarton and York ( see figure below) 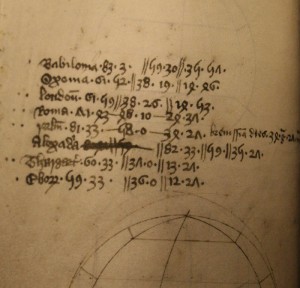 Several pages are devoted to the design of  astrolabes with illustrations. The library also possessed a copy of Chaucer’s treatise on astrolabes written for his son. 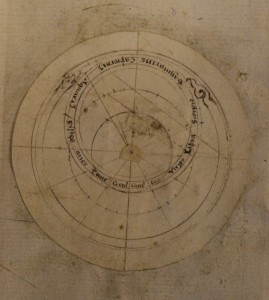 Amongst 150 pages of densely written medical notes is an illustration of the apparatus needed to distil the healing essences of various herbs including Rosemary, Sage, Fennel, Oregano and Roses. 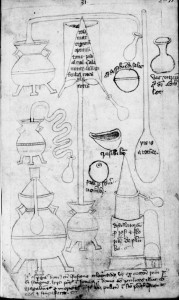 At the foot of the page is a method for removing fleas from a house which involved pouring goat’s blood into a newly dug hole in the house floor – ‘the fleas will feed on the blood and immediately die’. 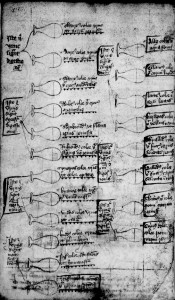 Another page depicts 20 flasks of urine of differing colour which reflected the patient’s condition and ailments (examination of the patient’s urine is still part of modern medical examination).

The final part of the book contains on page 158 the list of about 150 titles; the list however is incomplete and so the total number of books at Thurgarton Priory may have been much greater. The mixture of theology, philosophy, history, mathematics, medicine and astronomy is fairly typical of monastic libraries. Monasteries were not only houses of prayer but also the main centres of education in mediaeval England. Books would be borrowed by brothers and scholars and were loaned to other houses for study or copying. Some of the volumes at Thurgarton were on loan from the Augustinian house of St James at Northampton and a section on the lives of five female saints appears to mirror works from Beauvale Priory which lay only 10 miles from Thurgarton

Within such books lay the accumulated knowledge of centuries many of which were to disappear from the zeal of the reformers of 16th century England – the loss was not only of knowledge but also of great works of decorative art. A few survived.

Decorative script in MS 358 on the Zodiac 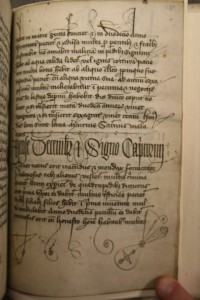 A complete list of titles from page 158 MS 358, part of the book list from Thurgarton Priory can be seen at http://thurgartonhistory.wikispaces.com/