Have you seen the Brown Monk? He is said to haunt the lanes of Thurgarton and locals will tell you that someone’s aunt or their grandfather saw something.

Direct first hand reports are rare, however here is one such from the Reverend William Goverton ‘The following incident happened on Christmas Day, 1971. I had been to Thurgarton church to assist at the Midnight Mass, and on my way home at 12.45 am, as I came down the drive, I saw in the headlights of my car what appeared to be a figure standing by the side of a large tree stump. The figure was of a bright golden colour. I thought at the time that it must have been a tree trunk about 6ft tall. Two days later I went back but found nothing there, no tree trunk. I mentioned the incident to someone who lived in Thurgarton who said that I had seen the Brown Monk and that several people had seen him.’ The reverend gentleman was unsure of what he had seen and pointed out that the Augustinian canons at Thurgarton wore black clothes not brown or golden.

‘ the ghost of Lady Wells who is said to walk whenever the Priory changes hands, Some years ago two sisters saw the lady- I heard the story from their brother. The lady in mediaeval dress emerged from the shadow of the Priory with two greyhounds on leash and disappeared across the Park in the direction of Epperstone’.

‘ a friendly spirit which appears to people who are dangerously ill and comforts them – I have no description of this visitation beyond the fact that the last person who saw it said she felt quite comforted by its appearance’.

‘ when the sexton was digging the grave of one of the last squires a pretty flaxen-haired child came and sat on the grave side. The sexton afraid that she might fall in, told her to go away and it walked up the church tower and disappeared’.

‘A party of visitors from Gedling was shown around the church and one lady asked if the guide knew of the Cooper family vault by the pulpit. It was said that when the vault was opened for a new burial some of the old coffins were found to be standing on end’ 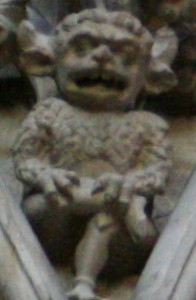 There is also the story of the Boggart who inhabited the Priory in the time of the Cooper family. This mischievous imp would on occasion chop wood, wash the dishes but also would let loose the domestic animals. Local tradition says that when the old house was demolished, the boggart’s hiding place - a hole in the base of a chimney – was discovered and it fled the house and now lives along the Dumble where at times it could be heard screaming. The boggart became melancholic and on dark nights the most grievous moaning could be heard by Thurgarton Dumble. The villagers were terrified and were reluctant to attend church on dark evenings – the vicar tried to reassure his flock by claiming that the noise was merely the booming call of a bittern. In the 1860s Squire Milward’s gamekeeper, Keeper Dick, took a potshot into the Dumble towards the sound of the boggart – its not known if the keeper found his target but the dreadful sounds were never heard again.

At the last count five underground passages have been described linking the mediaeval Priory with:– Priory Farm, the Red Lion, a Leper Hospital at Spital Farm, Southwell Minster and finally to Halloughton. That connected with Halloughton has the most gruesome history for it was said that the monks dug the passage to gain entrance to a nunnery and that the skeletons of newborn infants were found in the walls and chimneys of the ancient convent.

Throsby relates that when the kitchen of the Prebendary House in Halloughton was taken up a large key was found and that further investigation revealed a walled tunnel which could not be followed because it had flooded. At Thurgarton Priory entrances to underground passages have apparently been found and explored but led nowhere.

The neck of a mediaeval bottle was found near the Sheepwash Bridge in Thurgarton and is now stored in Mansfield Museum. 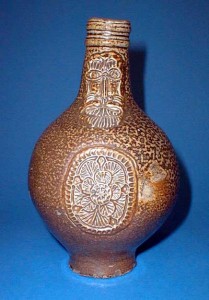 On the fragment of the neck of the bottle  from Thurgarton  one could make out the face of a bearded man which is typical of these 16-17th German salt glaze vessels, also called Greybeards or Bartmans (bearded man in German) -seen in photo above. Most were used as beer jugs but smaller ones were used as witch bottles. These bottles were filled with a mixture of nails, thorns, blood, urine, hair, and bone and were hidden in houses or outside in streams and fields where they were believed to protect against the spells of witches.

We’ll never know to which purpose  the Thurgarton Bellarmine bottle was employed – beer or magic – you choose.