The following description of Christmas in Thurgarton is taken from the memoirs of Miss Mabel Ellen Mott. Mabel was born in 1890, the eldest of the three Mott children. Her father Edwin was a farmworker and they lived in Sunnycroft  on Bleasby Road. Mabel became a music teacher and developed a great interest in local history. Her memoirs written in the 1940s include many details of village life. Here is her recollection of childhood Christmases in Thurgarton around the turn of the last century:- 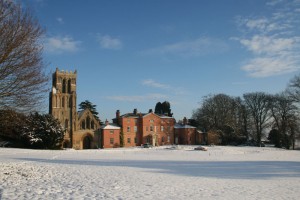 ‘Christmas was a great time in the village. During Advent the school children would learn carols to sing in the church on Christmas Day, whilst outside could be heard the piercing squeals from pigs being slaughtered for the luxury of home-made pork pies, sausages, brawn, hams and bacon. Good, yes very good, for not only did these things satisfy the palate but fed man’s body and gladdened his heart. All who could indulged in a party at Christmas, and what a spread – pig, poultry and beef were in plenty followed by mince pies, pastries, cakes and great trifles, with cream fresh from the tops of pancheons, all piled mountain high followed by home made cheese, washed down with wine or beer straight from the barrel. The school Christmas Party was held in the schoolroom – teas were provided, games played, presents chosen from the Christmas tree and prizes and medals given out. The vicar joined in the fun and payed the bill. The vicar also entertained members of the church choir to a supper and social evening at the vicarage. 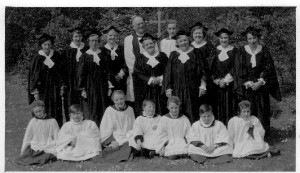 A special feature of Christmas was the midnight celebration of Holy Communion commencing at 11.30 pm on Christmas Eve. It was a moving uplifting scene with members of different families home for Christmas; fathers, mothers, brothers and sisters all filing in behind massive pillars into the dimly lit decorated church. The choir was swelled by past members home for the festive season, and often there would be great difficulty in finding sufficient surplices to fit. The service was very beautiful, always starting with the processional hymn ‘O Come All Ye Faithful’ and the congregation kept watch with the Shepherds waiting for the church clock to strike midnight, so heralding in another Christmas Morn. At the close of the service a lusty peal of bells from the tower broadcast the good news over the morning air, and if the moon shed its beams over new fallen snow, the night appeared to be full of enchantment. People hurried home, filled stockings, blew out candles and went to bed for a few hours before rising early again to attend to their various duties. 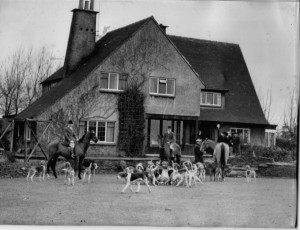 Every Boxing Day the hunt met at the Priory. Spectators took up their places in good time and delighted in watching the arrival of the ‘County People’. It was a case of ‘Who’s Who’ in the assembly of red coats and riding habits; everyone admired the dogs with their swinging tails and intelligent friendly faces, all in fine condition for running the fox to earth. Refreshments were handed around, the Earl of Harrington mounted his horse and all moved off and the sport began. Soon could be heard ‘Tally-Ho, Tally-Ho’, the scent was hot leading the throng over fields, hedges and ditches until the final note was sounded. Hunters wended their way homeward, and possibly so did Reynard.’