Brick is the main building material of the mid-Trent valley and on sunny days gives a  pleasing glow to the village scene. 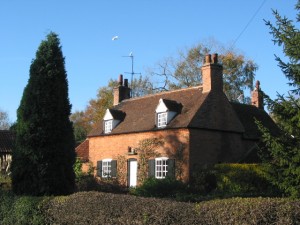 In contrast with its neighbouring villages however Thurgarton  also has considerable quantities of stone in its walls, barns, gardens and older buildings.

Most of this stone is local skerry stone which has a grey cut surface that varies from flakey lamina when cut across the grain and whirling patterns when en face.

The geological map below reveals an abundance of skerry stone in the hills of the northern half of the parish – the bands of skerry stone are shewn in grey on the map. The  Mercian Mudstone  (previously called Keuper Marl ) gives rise to heavy clay soil interspersed with beds of green-grey skerry stone and occasional deposits of pink marl. 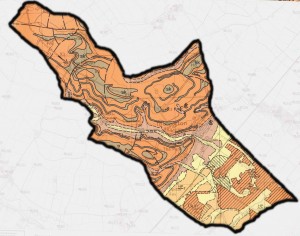 The mediaeval field map of Thurgarton includes ‘Stone Pit Close’ whose location corresponds to one of the skerry stone outcrops in the geological map  and  may well have been the major quarry site for  local skerry stone in the parish including that used in the construction of the Augustinian Priory of St Peter built in the 12-13th century.

Modified from centre of BGS map above  – Stone Pit Close is circled in red and the Priory is marked by the red triangle, 250m apart. 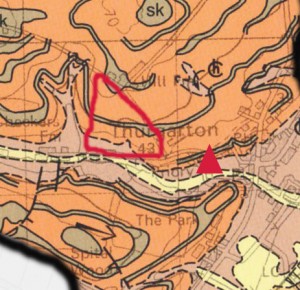 In addition to this grey skerry stone a more compact beige coloured stone is found in the village. This is white Mansfield stone, a sandy dolomitic limestone used in the construction of Southwell Minster in the 12-13th century. Many of the blocks found in Thurgarton still exhibit the  diagonal chisel marks of the mediaeval stonemason; others are carved pieces which allow an accurate identification of their source as the 12-13th century Augustinian Priory of St. Peters at Thurgarton. The stonemasons who built Thurgarton Priory therefore had a ready supply of rough stone on their doorstep and an established source of better quality stone from the Mansfield quarries. 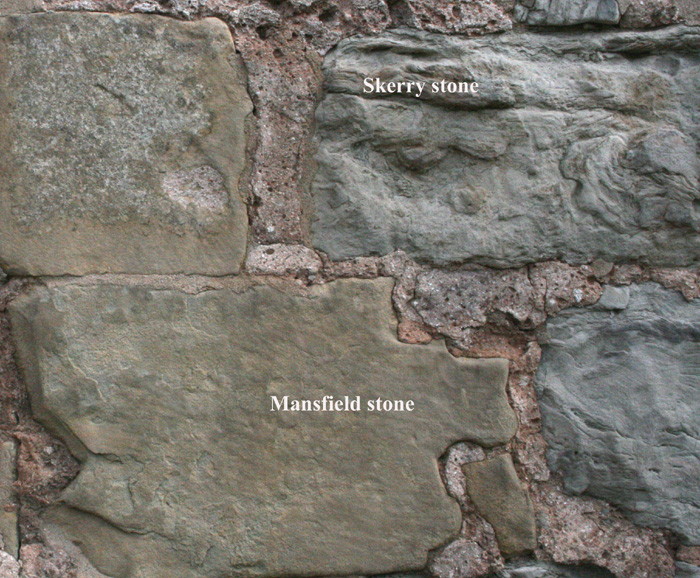 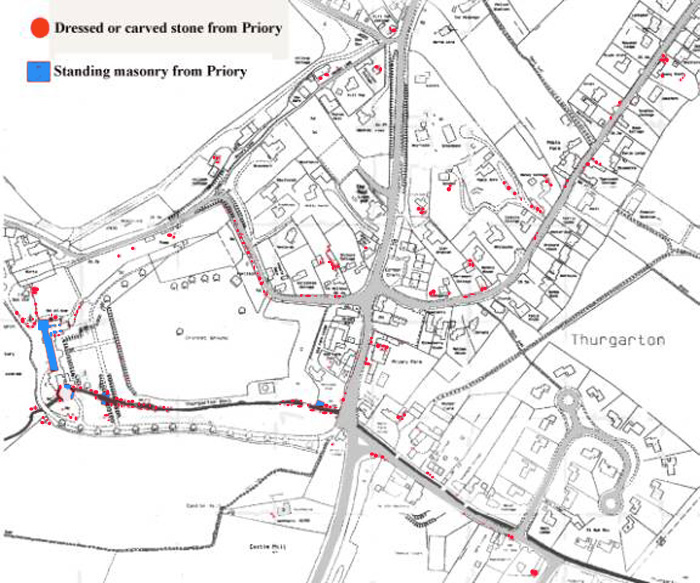 One purpose of the survey was to use the old priory stones scattered through the village like jigsaw pieces to reconstruct the buildings of the Augustinian Priory – a work in progress to which we shall return in a later article.

Some examples of priory stone in village gardens and walls 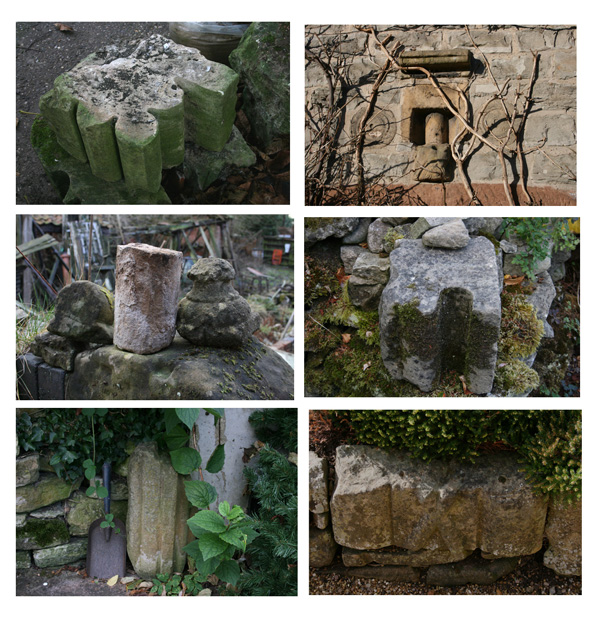 The reuse of Priory stone

The survey also revealed how stone from the priory had been recycled through the centuries  – good stone was never wasted. Some priory stone may have found its way into the village in the 16th century. At the dissolution in 1538 the Priory was sold to the Cooper family who demolished most of the priory buildings and recycled the stone to build their Tudor mansion but some stone was evidently ‘adopted’ by the locals – the scullery end of one of the older cottages has large blocks of carved and dressed Mansfield stone one of which bears the date 1593. 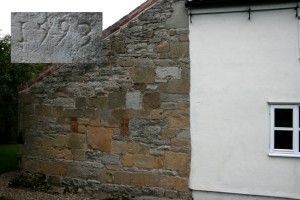 Even more priory stone would have been recycled in the  18th century when the Coopers demolished their Tudor house and in the 1770s built a new brick mansion and walled garden so releasing large amounts of good quality stone. Enclosure of the parish land and agricultural improvements saw a huge investment in land drainage, new farmhouses and large threshing barns. Several Georgian farmhouses were built in the parish including Hill Farmhouse which was faced with fine ashlar blocks of priory stone some of which still retain the mediaeval mason’s marks. 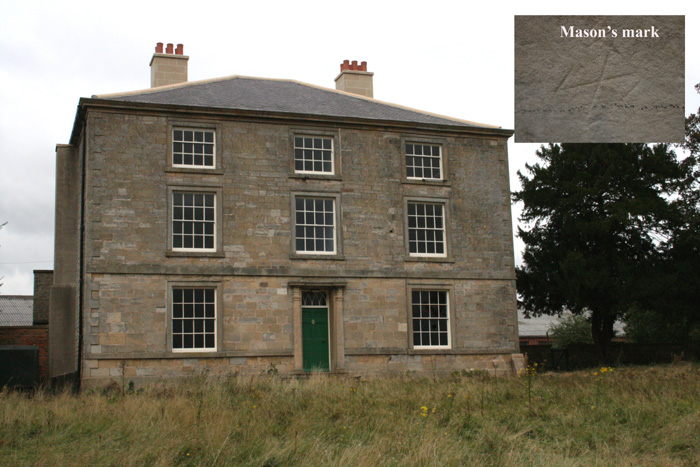 Outside the village eight large threshing barns were built of skerry stone in this period; some of this stone may have been from the priory but new local quarrying was probably necessary for such large scale building.

Four of the eight threshing barns in Thurgarton parish 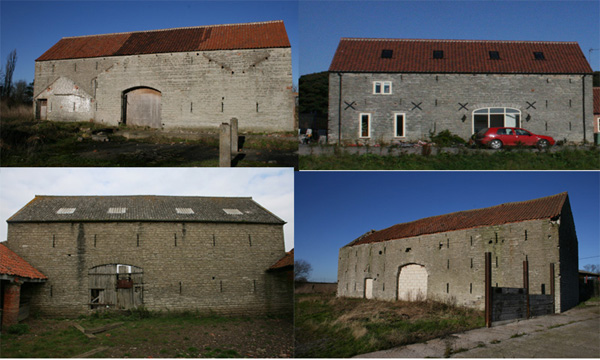 Within the village old priory stone appears in several barns such as one in The Hollows built in 1775 by John Hart of Old Farm. 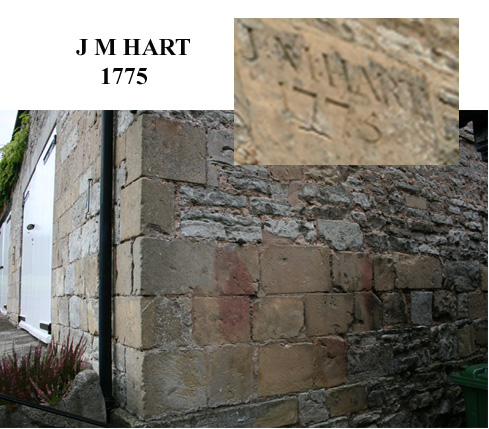 Towards the end of the 18th century brick was becoming more popular and old priory stone may have been used up – in 1790 John Hart (junior) used brick not stone in constructing the handsome barn next to his farmhouse. 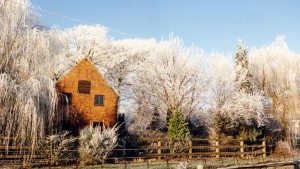 One thought on “The stones of Thurgarton”