The earliest parish maps of Thurgarton were drawn up about 1730 to settle a land ownership dispute between Trinity College, Cambridge and the Cooper family.

The Coopers owned most of the north of the parish and lived in a Tudor mansion next to the parish church. In 1726 a rough sketch of the Cooper lands showed fields, woods and lanes (blue in map 1); their land was chiefly low hilly country of heavy clay soil extending down to the escarpment of the Trent Valley. They also leased much of the Trinity College land and acted as Lords of the Manor.

Trinity College Cambridge had been granted the village and southern half of the parish by Henry VIII. The 1731 map of Trinity College land (white in map 1) included not only village buildings, gardens, fields and lanes but also the names of each householder and the land that they rented from the college

Combining these two maps provides us with the only detailed pre-enclosure map of Thurgarton parish. 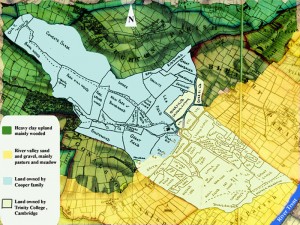 The field names and layout provide some insight into land usage not only in 1730 but also for the preceding centuries for many of these 18th century field names can be traced back to the early Norman period in the land grants of the register or cartulary of Thurgarton Priory indicating that the basic pattern of land usage in the parish had not changed for at least 500 years. 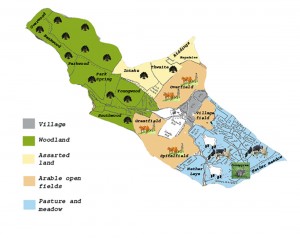 A park at Thurgarton was part of the endowment grant by Ralph Dayncourt to Thurgarton Priory which he founded in c 1130. This was probably a deer park and sections of a ditch and bank , remnants of a possible deer fence and  a deer leap, can still be seen on the northern boundary of the parish.

In 1536 the Prior of Thurgarton sold timber from ‘his park at Thurgarton’ to the Duke of Rutland to rebuild Belvoir Castle. The contract describes the extent of the park which appears to have covered most of the north of parish and was evidently heavily wooded given the size of the timber contract – 1200 large oaks over 10 years.

Mediaeval wooded parkland was a valuable asset and besides hunting and timber it also was a source of fuel for domestic hearths and for small scale industrial furnaces; charcoal and tile making are both recorded in Thurgarton. In winter fodder for livestock included woodland leaves and pigs were allowed to  forage for acorns and roots. The villagers collected woodland plants and berries to supplement their diet or for medicinal use.

‘The Park’ persists in modern Thurgarton but has shrunk to an area of new houses and adjacent fields to the west of the church.

(assarting) and which would have been incorporated into the open field system described below. These fields are named in mid-13th century land grants to the Priory which would be consistent with the increasing village population of this period and consquent need for more arable land. The mediaeval method of ploughing with ox teams along narrow strips of land gave rise to the typical  ridge and furrow patterns which have survived in many lowland parishes of Britain and are visible on field walking or in aerial photographs.

These arable strips of plough land surround the village and lie on the well draining escarpment land. The land strips (selions) are clearly seen on the Trinity map (map 3) and aerial photos clearly show ridge and furrow patterns for Great Field and the assarted fields above. 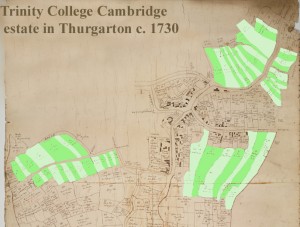 The pattern of arable fields is consistent with a three or four field rotational system of land use in the parish. Again several of these small strips of ploughland are mentioned in land grants to the Priory in the 13th century and earlier.

The wet valley floor provided ideal pasture land and hay meadows and numerous small closes for livestock. Records indicate rearing of pigs, cattle and sheep and the name Coneygree indicates a rabbit warren (much prized by the early Norman lords and by modern Frenchmen ).

The village was owned by Trinity College and so appears on the college map. 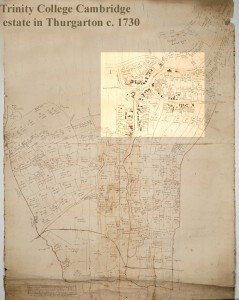 In this map houses and barns were denoted by letters ‘H’and ‘B’ ; in map 6 below the houses are in red, barns and outbuildings in brown, the school in orange and alms houses pink. 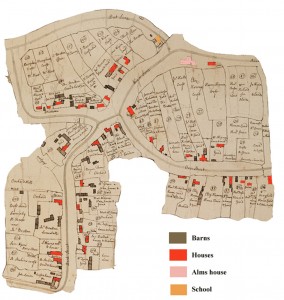 There were 27 named householders each with their house and outbuildings set in typically elongated plots of land – the croft.  Each householder is listed in map 7 below with a colour code for their corresponding house and croft. 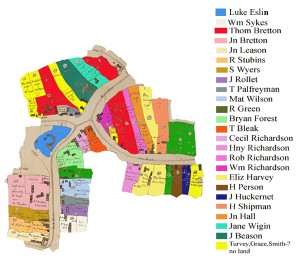 The map also identifies the fields worked by each villager; they are shown in map 8 using the same colour code as in Map 7 above

Map 8 Land worked by each householder  – colour code as in map 7. 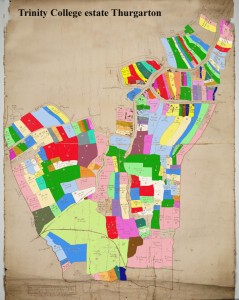 Each householder worked several widely seperated fields and strips of ploughland. This is more clearly seen if we simply look at one individual – John Brettle ( misspelt Bretton on the original map) 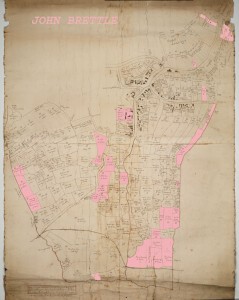 Thurgarton was a typical East Midlands parish with a single centrally positioned village surrounded by three or four large open fields worked on a yearly rotation system which would have been closely supervised by the villagers in their local Manorial Court. The parish stretched from wooded upland in the north to the well drained fertile escarpment on which stood the village and on to the the river valley with its pastures and meadows – an ideal balance of woodland, arable and pasture making the parish almost self-suffient for most of its needs.

This ancient pattern of land usage by the village community was to change dramatically before the end of the 18th century when  enclosure came to the parish  and will be the subject of another article.

6 thoughts on “The earliest map of Thurgarton: land use in the parish”