How to defend Thurgarton from the Nazis was not the preoccupying concern for Churchill in 1940-1 but it was for the 300 souls living in the village. A recently released map of 1941 shows army plans for just such an event – click on maps to enlarge. 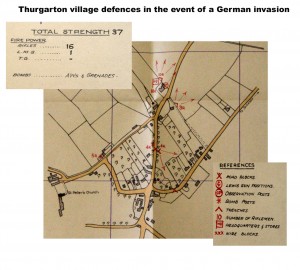 A total strength of 37 men was deployed to three main sites in the village. 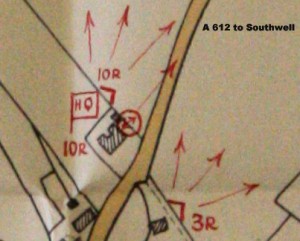 The main strongpoint was sited on the edge of the village at the top of Thurgarton Hill. In the hedge of the White House were 10 riflemen in a trench alongside a Lewis machine gun crew overlooking the main road towards Southwell. A headquarters lay in the field behind the White House with 10 riflemen in reserve. Another 3 riflemen were posted in a trench south of the road along the footpath by the vicarage. 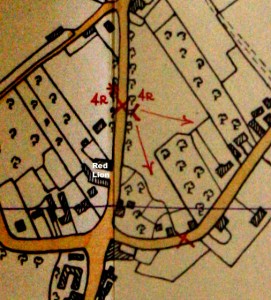 Half way up Thurgarton Hill in the cutting just above the Red Lion the main road was blocked. On the north of the road four men armed with rifles and grenades directly overlooked the road block in the cutting below them. Four further riflemen manned a trench on the opposite side of the road, overlooking the Bleasby Road  which also had a road block next to the chapel. 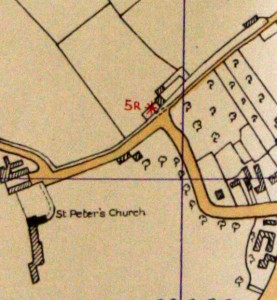 Five men armed with rifles and grenades were to take up a position in the garden of  Hollows Cottage  looking directly down the deep cutting of Priory Road as it turns up from the cricket pitch.

The men would almost certainly have been the local Home Guard members of which are seen in the photograph below. Their weapons were mainly old issue guns such as Enfield rifles and the Lewis light machine gun. The bombs were grenades and AWs – the latter were bottles filled with phosphorus which on impact shattered in a sheet of flame; a step up from the Molotov Cocktail they were used as anti-tank weapons. 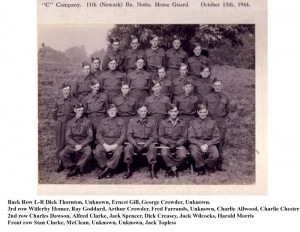 One of the great ‘what ifs’ of 20th century British history is the outcome if German troops had managed to cross the Channel in numbers. Stalwarts of the Home Guard will tell you that over 1.5 million riflemen were ready for them but if they had succeeded in reaching the defences of  Thurgarton then for the British the future would have been bleak – or would it ? Maybe Thurgarton would have been the turning point.

One thought on “Thurgarton prepares for Nazi invasion 1941”