Many parishes with a ready  source of clay have evidence of old brick or tile manufacturing – field names such as Brick Close or Tilekiln Meadow are obvious clues. Those who have walked the footpaths in the north of Thurgarton  parish on a wet day can testify that there is no shortage of clay in these hills and if you walk up the track  from the village past Hill Farm you pass  Tile House Meadow which lies on the right beyond the farmhouse. 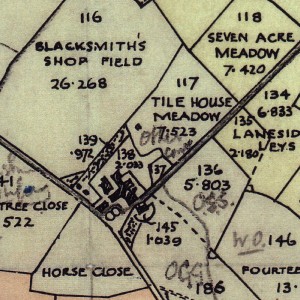 Tile House Close in grey from 1730 map of Thurgarton 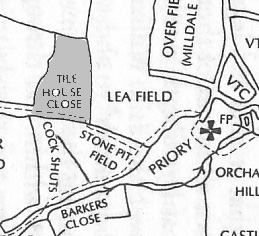 — and even further back to 1537, one year before the surrender of the Augustinian Priory, when Tylehouse Close was leased for four years by Prior John Barwick to William Freeman of Goverton. For the sum of £5 he had the right to cut brushwood, dig clay and carry sand, wood and coal – all essentials for tile production. The name ‘Tilehouse’ had evidently been in use for some time before this contract of 1537 which also mentions a right of access to and from the Tilehouse Close by the ‘old accustomed way’. There is no reliable indication of the duration of industrial activity on this site but it was certainly active through the middle decades of the 16th century.

Aerial photographs of the site taken in the winter snows of 1963 show several irregular pits and humps covering an area of at least 2 acres. Some of the hollows may have been diggings for clay but others features may represent industrial buildings and kilns. 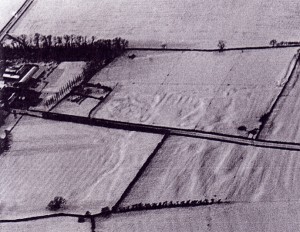 There has been no formal survey of this site but recent casual field walking after  ploughing confirmed a series of shallow pits and humps with numerous fragments of charcoal, furnace slag and tile. The tile fragments found were unglazed and appear to be of a functional type of roof and flooring  tile with no evidence of decoration. 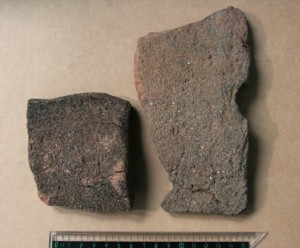 An earlier phase of tile making was discovered on Castle Hill just 300 m south of the Priory. Excavations on this site in the 1950-60s revealed a late Anglo-Saxon and an early Norman church with surrounding burials . The archaeologists also discovered a concentration of glazed tiles and slag. Several  fragments of tile had glaze on their broken surfaces, such ‘wasters’ usually resulted from damage or misfiring in the kiln.

Waster tile with glaze on broken edge from Castle Hill 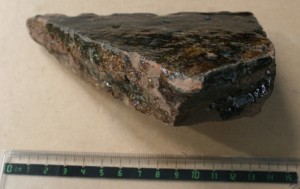 The change from a religious to an industrial use of Castle Hill probably occurred by the 13th century and tile making may have been part of the major building phase of the Priory. The tiles had a deep brown – greenish glaze possibly from the addition of lead and other minerals and were a mixture of curved and flat forms suggesting use for both roofing and flooring. 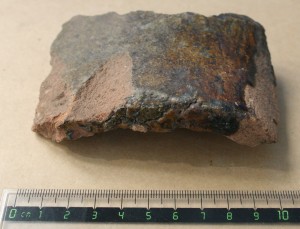 A few decorated ‘ encaustic’ tiles have been found in and around the Priory site and are typical of high class flooring found in major mediaeval buildings. They were probably made by travelling craftsmen and show distinctive  regional patterns. A vast  range of designs were created and anyone interested can view over 2000 such mediaeval tiles at http://tileweb.ashmolean.museum/.

Only a few tiles from Thurgarton Priory have survived and are shown below. 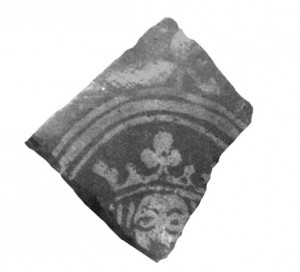 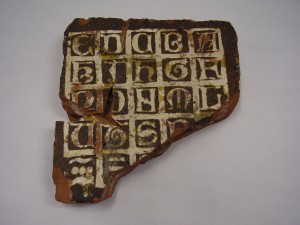 Some are too small to identify – this may be another crowned figure. 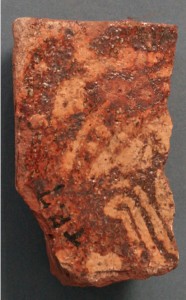 and is probably a fragment of a tile depicting Mary and the infant Jesus. 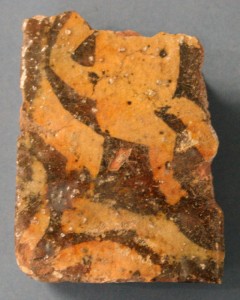