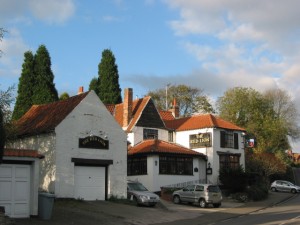 According to local legend somewhere in Thurgarton Priory was a secret underground passage through which the brothers could escape the constraints of the cloister to enjoy more worldly pursuits. According to  one version the tunnel emerged in the cellar of the Red Lion pub in Thurgarton village but in the other the canons had dug a remarkable three-mile long passageway to a supposed nunnery at Halloughton. There is sadly no evidence of such an underground tunnel but the story reflects the popular image of beer swilling monks cavorting with naughty nuns.

The canons of Thurgarton Priory were all ordained priests who had taken vows of Poverty, Chastity and Obedience on joining the Augustinian order. Augustinian communities were regularly inspected by their local bishop – what might nowadays be called an Offmonk report.  Between 1276 and 1316  Thurgarton Priory was severely and repeatedly censured by visiting Archbishops of York whose reports portray a sorry state of affairs in the priory. Adam de Sutton, Prior of Thurgarton, was a sick aging man in 1276 and had withdrawn from priory life.  The head of a religious house such as the Prior of Thurgarton was both a religious and secular leader and the welfare of the house depended on his ability to manage the priory estate efficiently and to provide spiritual guidance to his flock. The archbishop ordered that Prior Adam ‘ should enter the cloister and chapter more frequently and correct excesses’ and ‘to eat in the refectory as often as his illness allowed’. Evidently discipline had become lax and some brothers were leaving the priory without consent to socialise in the district. Periods of silence were ignored as were the priestly duties of alms and care of the sick.

The priory’s finances were in a mess. Prior Adam was ordered to pay the priory’s debtors and to take no financial decisions without advice from his senior brothers in open meetings. He was also directed to appoint two senior canons to visit the outlying manors and granges to ensure that the locals were not swindling the priory.

Prior Adam appears to have struggled on for at least another two years but he and the rest of the inmates at Thurgarton failed to comply with the archbishop’s demands. Certain canons were still in the habit of slipping out for an evening’s entertainment and returning to the priory in a loud and disruptive manner; these boisterous brothers had no need of a tunnel but sneaked out through gaps in the priory fences. To put an end to such revelry the archbishop ordered immediate repairs to the priory precinct walls and fences and commanded that canons could only leave the priory grounds in pairs. As punishment to the whole community the archbishop forbade them meat on Mondays.

Enter Hugh de Farndon, a senior brother at Thurgarton, who took great exception to the archbishop’s interference and wrote a pamphlet attacking the Archbishop of York, Prior Adam and finally all his fellow canons. Hugh was labelled  intolerant, bad tempered and a destructive influence in the priory and was promptly imprisoned by the archbishop until he repented of his behaviour. Twenty years later however, in 1295, Hugh de Farndon was found wandering the countryside in a miserable plight. He was readmitted to Thurgarton Priory but not allowed into the cloister until penance was done – but in 1301 he was again a vagrant wandering the countryside. Such behaviour raises the question of Hugh’s mental health – or was he simply an embittered grumpy old man?  Whichever was true, in a small community such as Thurgarton Priory (probably not above 25 canons) such a disruptive individual as Hugh could have a disastrous effect on the morale of the house.

In 1284 there was a vacancy for the position of Prior at  Thurgarton but the canons could not agree on the choice of a new leader. One faction supported local man Alexander de Gedling but after two abortive elections Archbishop Wickwane of York lost patience with the priory and imposed his choice on Thurgarton. He appointed an outsider, Gilbert de Pontesburgh of Nostell Priory Yorkshire, whom he described as ‘a man provided with spirituality and other marked virtues’.

Prior Gilbert’s time at Thurgarton was not dull. In May 1286 he was accused of adultery with Margery, wife of Reginald Canum of Lowdham, but was found not guilty and was reinstated as Prior. A few weeks later a business meeting of the priory held in the chapel was disrupted by an outburst from Alexander de Gedling, the previous local contender for the position of prior, who used foul and scandalous language.  In 1290 another canon, Walter de Bingham, was guilty of a violent assault on a clerk, John de Sutton, and was excommunicated. Late in 1290 Prior Gilbert had understandably tired of Thurgarton; he resigned and returned to Nostell Priory to be replaced a month later by none other than Alexander de Gedling.

Alexander proved to be a poor administrator and by 1300 the priory was again in serious debt and being pursued in the courts by numerous debtors including the Sheriff of Nottingham. Alexander had attempted to illegally sell off priory lands in Derbyshire (an offence called ‘alienation’) and was deposed by the new Archbishop of York. The loss of the Prior only increased the debtors’ demands which almost led to a complete collapse of the priory’s finances, and the canons pleaded with the archbishop for the reinstatement of their old Prior – to no avail. The archbishop instigated strict financial control at Thurgarton with payment of debts and restrictions of expenditure; a regime which restored stability for the time being.

Walter de Bingham is a puzzling character. We have already noted his excommunication in 1290 for assault and he pops up in the records again in 1301 when he was accused of vagrancy – a shameful condition in mediaeval times especially in a priest. He was sent to Bolton Priory for a period of penance. Surprisingly he next appears in 1310 as Prior of St Oswald’s Priory in Gloucester where he remained in post for several years, was removed, reinstated and again removed, finally returning to Thurgarton in 1312. At  Thurgarton in 1315 he repeatedly failed to attend Mass and was ordered to do penance which included the recitation of seven Psalters over seven weeks and a strict diet of beer, bread and vegetables ( the withdrawl of meat was considered a great hardship).

In 1313 Brother Hugh de Eyrton was excommunicated for a violent assault on fellow canon Roger de Scaupwyck. Hugh should have sought penance from the Archbishop of York but instead journeyed to Rome to receive absolution of his sins from a cardinal. On return to Thurgarton he was subject to further penance by order of a disgruntled archbishop. In the same year another canon of Thurgarton, Robert de Morton, began to volubly question apostolic teaching and provoked ‘contention and brawling and frequent loud noises often provoking many to anger.’ Robert was sent to Bolton Priory and after due penance returned in the following year to Thurgarton.

Sins of the flesh

In 1315  Brother Henry of Norwell was guilty of adultery (‘incontinence’) with Agnes of Newark but more shocking was the behaviour of John de Rudestan. Appointed Prior in 1304, he was convicted of adultery in 1315 with one Alice Cade of Thurgarton.  In 1316 Prior John’s position became untenable when he was found guilty of financial mismanagement and fraud and  was duly deposed.

After 1316 a period of calm returned to the cloisters of Thurgarton. 1316 to 1320 were terrible years of cold wet weather leading to repeated crop failures, sheep and cattle plagues and a prolonged famine with enormous loss of life. It may be that the priests of Thurgarton were too busy ministering to their hard-pressed parishioners to waste time on petty quarrels. In 1328 a survey of the priory estate showed a healthy financial balance and evidence points to a period of new building in the church probably at the east end in the new Decorated Style. In 1340 the Prior of Thurgarton was sufficiently well respected to be appointed one of the county officers responsible for raising taxes for King Edward III.

Thurgarton was not alone in being the object of a bishop’s wrath and most religious houses were at some period in need of correction. The majority of brothers at Thurgarton Priory strove to lead peaceful and disciplined lives of prayer and but as always it was the exploits of the unruly few which stayed in the common memory of the local villagers and survived as stories of high living, secret tunnels and roistering monks. 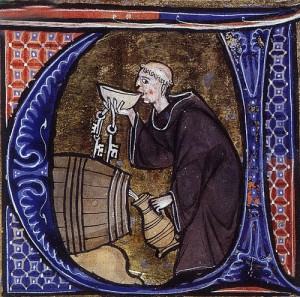