This article is an edited version of a school history project researched and written by Tom Wilson whose grandmother, Mrs Margaret Whiteside, lived in Thurgarton.

On the evening of the 28th May 1944, Cyril Sneath, a local builder, left his home at Thurgarton just before 9pm for duty as ARP warden at the Air Raid Precautions unit based at The White House in Goverton. They had been alerted that evening to night time training flights from Syerston airfield which lay a mere 2 miles south just beyond the Trent. Shortly after coming on duty the four man unit heard a plane ‘dying’ over towards Thurgarton.

In Thurgarton men in the local pubs also heard a plane in distress and rushed out just in time to hear a huge explosion followed by a column of black smoke. A mile to the west people in the hamlet of Gonalston raced to the crash site a few fields  above Glebe Farm. The scene was one of devastation with a huge blaze, black smoke and the wreckage of the airplane scattered over the field. First on the scene were two local lads on bicycles (their sister Mrs Alan Yates still lives at Glebe Farm) and what they saw and heard that night gave them nightmares for many weeks afterwards. A few moments later the ARP unit  arrived but nothing could be done for the seven man aircrew – all had perished on impact.

The plane was a Lancaster bomber manned by seven young airmen from Britain and Canada:-

Lancaster L7578 was originally built in 1940 as a Manchester bomber by A. V. Roe of Newton Heath and later modified to a Lancaster type. It had been part of 5 Group serving in Squadrons 97, 207, 83, and later in Conversion Units 1654 and 1668 until finally being employed in the No. 5 Lancaster Finishing School based in 1944 at Syerston Airfield.

The Lancaster bomber was the main workhorse of  Bomber Command in World War 2 and suffered a high attrition rate. In 1944 most new aircrews at Syerston trained on Stirlings or Halifaxes before gaining a few weeks experience flying Lancasters at the Finishing School.

We do not know the cause of L7578’s crash. It was an old aircraft flown by a relatively inexperienced crew but one report raises the possibility that a parachute harness became entangled in the plane’s controls on climbing from Syerston. 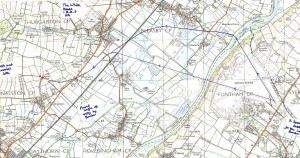 Witnesses to the plane’s final moments described it veering away from the villages of Bleasby and Thurgarton shortly after take off ; they believed the pilot knew that a crash landing was unavoidable and headed for open fields.  Just before impact the plane took off the top of an oak tree in the field hedge. 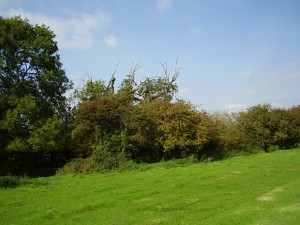 The seven airmen were buried in adjacent plots at Newark Cemetery and their graves are tended by the Commonwealth War Graves Commission. 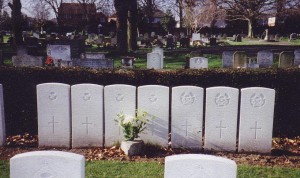 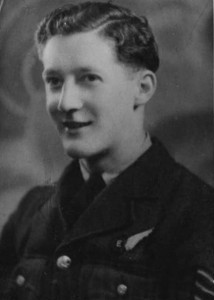 A few years after WW2 the parents of James Middlemas erected a memorial stone to their son and his fellow crewmen. It stands on the edge of the field just 30 yards from the crash site. 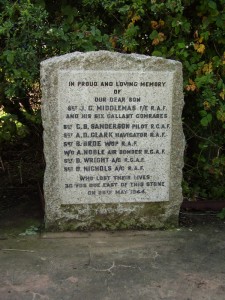